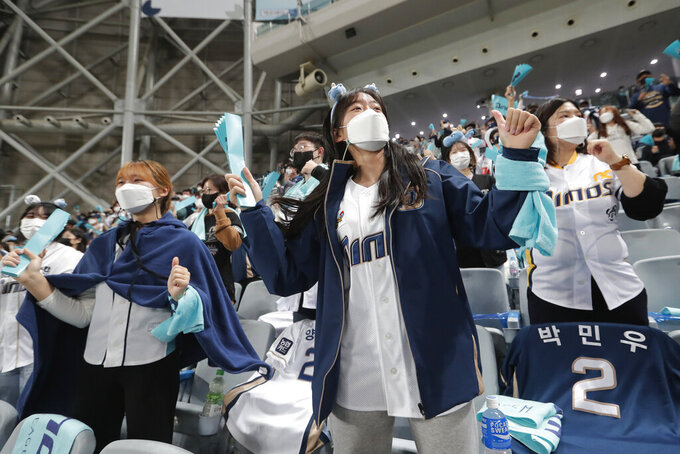 Fans wearing face masks to help protect against the spread of the coronavirus cheer during Game 1 of the Korean Series, the Korea Baseball Organization's championship round, between Doosan Bears and NC Dinos at Gocheok Sky Dome in Seoul, South Korea, Tuesday, Nov. 17, 2020. South Korea says it will tighten social distancing rules in the greater Seoul area and some parts of eastern Gangwon province to try to suppress a coronavirus resurgence there. (AP Photo/Ahn Young-joon)

MLS Golden Boot winner Diego Rossi is quarantined in Uruguay after the Los Angeles FC forward tested positive for COVID-19 while with his national team.

All four players are unlikely to return to Los Angeles in time to participate in their club’s first playoff game, dealing a major blow to LAFC’s hopes of contending for a title. Seventh-seeded LAFC begins the playoffs Tuesday night in Seattle.

Rossi, who also won the MLS Young Player of the Year award this season, didn’t play as a substitute in either of Uruguay’s international matches this month. The 22-year-old Rossi scored 14 goals in 19 games this season to win the Golden Boot as MLS’ top goal-scorer, an award won by teammate Carlos Vela last season.

USC Upstate basketball coach Dave Dickerson will self-isolate and help coach the Spartans remotely as he deals with a COVID-19 issue inside his family.

The public South Carolina university announced Dickerson’s status Wednesday, a week before USC Upstate opens its season against Southern Wesleyan. Dickerson told the school his wife was exposed to the novel coronavirus and he didn’t want to take the chance of an outbreak among his team and staff.

Dickerson plans to meet virtually each day with players and staff. Spartans assistant coach Stacy Palmone will coach the team during games and practices.

USC Upstate competes in the NCAA Division I Big South Conference. Dickerson is in his third season.

Washington State basketball coach Kyle Smith has tested positive for COVID-19 and will miss the Cougars' season opener next week.

The school announced Smith had a presumptive positive antigen test earlier this week and it was confirmed via a molecular test.

Smith will self-isolate before returning to the team and assistant coach Jim Shaw will serve as acting head coach until Smith returns. No other members of the Cougars basketball program are in COVID protocol.

Smith said in a statement that he was informed Tuesday night that he had tested positive for COVID-19 after experiencing some minor symptoms.

The Las Vegas Raiders have placed seven more players on the COVID-19 list as “high risk” close contacts with teammate Clelin Ferrell after he tested positive for the coronavirus.

If those players all keep testing negative and have no symptoms they will be able to return to play Sunday night against Kansas City, even though they will miss the week of practice.

The Los Angeles Rams have placed three practice squad players on the reserve/COVID-19 list one day after reporting a positive test for an unidentified player.

Receiver JJ Koski, tight end Kendall Blanton and defensive back Jake Gervase were placed on the list Wednesday. The Rams didn’t say whether the players had all tested positive, or were close contacts with the player who had the positive test.

None of the three players has played for the Rams this season.

The Rams scrapped their walkthrough practice scheduled for Wednesday and conducted team meetings virtually. They haven’t announced plans for the rest of the week, but they had an extra day of preparation before they face the Tampa Bay Buccaneers on Monday night.

The Mountain West Conference announced the game between UNLV and Colorado State in Fort Collins on Saturday won’t take place due to positive COVID-19 tests within the Rebels program.

The league said UNLV is unable to travel and participate.

It’s the second time this season the Rams have had a game called off. Their home opener against New Mexico on Oct. 24 was canceled due to a prevalence of the novel coronavirus within New Mexico’s county.

Down the road from Colorado State, rival Colorado remains off this weekend. The Buffaloes had their game against Arizona State canceled due to the Sun Devils not having the minimum number of scholarship players available for the game because of the virus.

In accordance with New York state guidelines and Siena protocols, individuals who test positive are isolated and close contacts to those individuals are quarantined. The state Department of Health initiates all contact tracing and will work with the college after interviewing the individual who tested positive to determine close contacts.

The move Wednesday came a day after placekicker Graham Gano tested positive for COVID-19 and was placed on the list.

Players are placed on the list after either testing positive or being quarantined due to close contact with a player who tested positive.

No. 22 Texas’ game at Kansas scheduled for Saturday has been postponed to Dec. 12 because the Jayhawks cannot meet the Big 12′s roster limits for a position group due to a combination of injuries and COVID-19-related issues.

The game is just the second Big 12 Conference game to be postponed this season because of the virus, but the 13th across the country this week in major college football.

Oklahoma State at Baylor, which was postponed in mid-October when Baylor temporarily suspended football operations after several positive test results for COVID-19, will also be played Dec. 12.

No. 24 Louisiana-Lafayette’s nonconference game against Central Arkansas scheduled for Saturday has been called off because of COVID-19 concerns with the Ragin’ Cajuns, and Utah State at Wyoming on Thursday was also canceled.

ULL said in a release it was hopeful to return to practice Saturday so it could begin preparing for its next Sun Belt game, against Louisiana-Monroe on Nov. 28.

Utah State's COVID-19 cases forced the Aggies to call off their Mountain West game against the Cowboys.

The number of games across all of FBS postponed or canceled was up to 12 out of 62 scheduled. Last week 15 out of 59 were called off.

Ohio State will prohibit family and friends of players and coaches from attending football games this season because of the dramatic spike in COVID-19 cases in the state.

The school has allowed a few hundred people at the first two home games, but that will end with the No. 3 Buckeyes’ game at Ohio Stadium on Saturday against No. 9 Indiana. The stadium holds about 105,000.

In a release, Ohio State said the decision was made after the Columbus Department of Health on Wednesday issued a 28-day stay-at-home advisory that starts at 6 p.m. Friday to try to stem further spread of the pandemic.

The decision regarding football games will be re-evaluated before the final home game against Michigan Dec. 12. But families won’t be allowed to attend men’s and women’s basketball or hockey games scheduled in December.

A limited number of media will be allowed to cover Saturday’s football game, which will be nationally televised on FOX.

Six more ECHL teams have opted out of playing this season in second-tier minor league hockey because of the COVID-19 pandemic.

Players on those teams are free agents. The league says all teams plan to be back for 2021-22. They get to retain players’ future rights if they pay their insurance this season.

ECHL Commissioner Ryan Crelin says he doesn't see a path for teams in the highly affected Northeast to allow fans at games.

The ECHL is scheduled to begin the season Dec. 11 with 13 teams in action. The remaining team will start Jan. 15.

The NHL is still planning to start Jan. 1, though talks between owners and players are ongoing.

The PGA Tour now has three players who have tested positive for the coronavirus during the RSM Classic at Sea Island.

Kramer Hickok and Henrik Norlander each received positive tests and have withdrawn. Hickok got into the tournament as an alternate after Bill Haas tested positive earlier in the week.

Champ returned two negative tests and was allowed to play the following week.

Norlander said he had a COVID-19 test on Wednesday morning after noticing symptoms the night before.

That brings to 18 the number of PGA Tour players who have tested positive since golf resumed on June 8.

The American Athletic Conference says Houston at SMU and Navy at South Florida scheduled for Saturday have been postponed because of COVID-19 issues.

It is the fourth game Houston has had called off this season because of the coronavirus but the first to be wiped out because the Cougars were unable to play.

Navy has now had three straight games postponed, though this time the opponent was the problem. USF said it could not play because of the impact of COVID-19 on its team.

No make-up dates were immediately announced. The schools said they will work with the conference to reschedule.

The two postponements raise the number of games disrupted this week by the virus across major college football to 10 after 15 were called off last week.

The Union of European Football Associations has decided that Norway was responsible for not being able to field a side against Romania, so it has forfeited the Nations League game as a 3-0 loss.

The urgent disciplinary verdict on Sunday’s canceled game was announced hours before Norway was to field an under-strength team for a decisive game in its group against leader Austria on Wednesday.

At the weekend, public health officials in Norway ordered the players to quarantine and not fly to Bucharest after defender Omar Elabdellaoui tested positive for COVID-19. The Norwegian soccer body said it could not defy the government decision.

It was the first Nations League game canceled since the current edition started in September during the coronavirus pandemic.

A second UEFA disciplinary verdict is due within days. Ukraine was unable to play host Switzerland on Tuesday because the squad was quarantined by public health officials after several COVID-19 infections in the squad.

Ukraine risks forfeiting the game as a 3-0 loss for failing to ensure replacement players were available. The squad had been hit with virus cases before arriving in Switzerland.

It’s the latest development with the virus for the team, which previously placed offensive lineman Chris Hubbard and fullback Andy Janovich on the list and had a staffer test positive for the novel coronavirus last week.

The NFL created the list for players who have either tested positive for COVID-19 or have been quarantined after having been in close contact with an infected person.

The Browns have had to close their facility twice in the past six days to do contact tracing after receiving results of a positive test.

Conklin signed with Cleveland as a free agent in March and has solidified a troublesome position.

Arsenal and Bosnia defender Sead Kolasinac has tested positive for the novel coronavirus, adding to Bosnia’s woes ahead of a Nations League match against Italy.

Bosnia also will be without another six players in the home match on Wednesday, including its main striker, Edin Dzeko, because of positive tests for COVID-19 and league quarantine guidelines.

Professional soccer and hockey clubs in Switzerland can get federal funds to compensate for lost ticket sales if they cut salaries.

The Swiss Federal Council says it wants to “compensate clubs for up to two thirds of their lost ticket sales revenue” during the coronavirus pandemic.

The federal aid will come with the requirement of “permanently reducing top salaries” and paying no shareholder dividends, maintaining investment in youth and women’s sport and being transparent about their spending.

The government says the majority of a $192 million fund kept for loans to sports clubs in 2021 could be allocated in “non-repayable contributions.”

Swiss soccer and hockey officials have said that clubs risk bankruptcy after months playing in front of no or few paying spectators.