The Latest: NCAA moving some championships to single sites 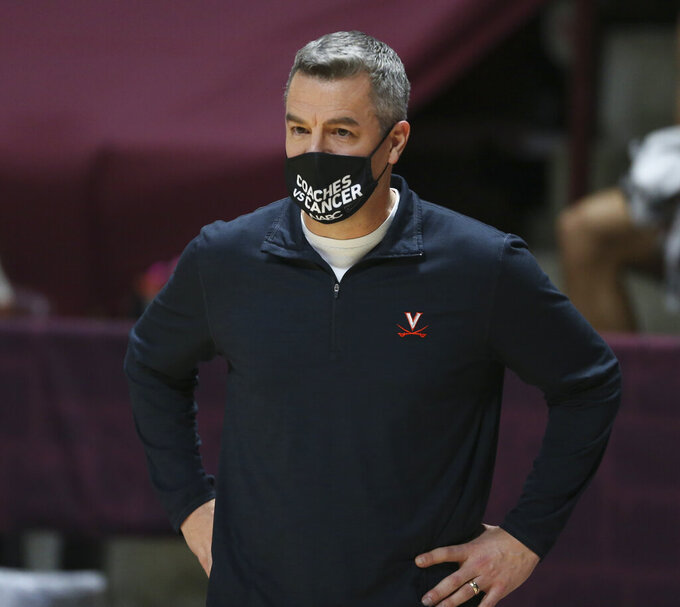 The NCAA is moving Division I women’s championship events in volleyball, ice hockey and bowling to single sites. The changes to the format are in response to directives to have as few preliminary-round sites as possible.

All 48 teams in the volleyball tournament will play at the CHI Health Center Arena and Convention Center in Omaha, Nebraska, beginning April 13. Semifinal matches will be April 22 and the championship match April 24.

The 16-team National Collegiate Bowling Championship will be held at AMF Pro Bowl Lanes in Kansas City, Missouri, from April 7-10.

The eight-team hockey tournament will be held at the Erie (Pennsylvania) Insurance Arena beginning March 15. The semifinals will be March 19 and the final March 21.

The NCAA also announced that Division III winter championships have been canceled because of low participation numbers among member schools.

The National Hockey League now has four teams paused for virus-related reasons after the Minnesota Wild were shut down through at least Tuesday.

The Wild now have six players on the league’s COVID-19 list and had their next four games postponed. The Vegas Golden Knights, New Jersey Devils and Buffalo Sabres were already paused because of the virus.

The Wild and Colorado Avalanche were set to finish a four-game, home-and-home series Thursday night in Denver.

Five Minnesota players were added, making it six for the Wild. Colorado, which most recently played Minnesota, had one player added.

Four more New Jersey players appeared on the list to get to 17. Buffalo, which played the Devils last weekend, has two more players on it and is up to four.

The Devils had games postponed through Saturday and the Sabres through Monday.

Augusta National is donating property it owns and $1 million in a partnership with a local health organization to administer vaccinations for COVID-19.

Chairman Fred Ridley says the home of the Masters will provide a shopping center as the central vaccination site for the Augusta community. It will be run by Augusta University Health, starting Feb. 8, and will stay open as long as necessary.

“Helping expand access to COVID-19 vaccinations is another meaningful way to do more for our neighbors in the Augusta community that has supported the Masters Tournament for more than 80 years,” Ridley said.

New Mexico men’s basketball has canceled a two-game series against San Diego State this week due to not having enough scholarship players.

Lobos coach Paul Weir said Wednesday his team was down to five scholarship players after three players asked to take a break for various reasons. He said the Lobos are planning to play two games against Colorado State next week.

New Mexico temporarily relocated to Texas to start the season due to strict COVID-19 protocols in its home state. The Lobos women’s team and both New Mexico State programs also relocated out of state before the teams were allowed to practice again last week.

New Mexico is 5-11 overall, 1-11 in the Mountain West Conference while playing all of its games out of state.

Saturday’s Atlantic Coast Conference men’s basketball game between Louisville and No. 14 Virginia has been postponed, with Pittsburgh now scheduled to visit the Cavaliers in Charlottesville that day. The postponement follows one earlier Wednesday between Louisville at Syracuse following a positive test, quarantining and contact tracing within the Cardinals’ program.

Pitt and Virginia were scheduled to meet on Feb. 24.

The league also announced several rescheduled games: Georgia Tech’s visit to Clemson will move up a day to Feb. 12, with Tech hosting Pitt two days later. A postponed contest between Virginia and North Carolina State has been rescheduled for Feb. 24.

The National Women’s Hockey League has suspended the remainder of its season because of additional positive virus test results.

The NWHL announced the stunning move Wednesday on the eve of the semifinals that were scheduled to be televised nationally in the U.S. Two of the league’s six teams had already withdrawn from the tournament, with one citing several COVID-19 cases.

The league was hoping that playing in a quarantined bubble in Lake Placid, New York, and using saliva testing developed by Yale University would allow it to get through the season and playoffs and present the Isobel Cup. The pandemic also forced the cancellation of the remainder of the 2019-20 season.

The Southeastern Conference has announced the postponement of a pair of Tennessee women’s basketball games.

Both games were Top 25 matchups. No. 18 Tennessee’s game Thursday night at No. 24 Mississippi State and the rescheduled game with seventh-ranked Texas A&M game on Sunday have been postponed.

The league cited a combination of a positive test, contact tracing and subsequent quarantining of individuals within the Lady Vols’ program.

The league said the postponement was due to a positive COVID-19 test, quarantining and contact tracing within the Cardinals' program.

It’s the second postponement in three games for Louisville, which is due to visit No. 14 Virginia on Saturday. The Orange visit Clemson on Saturday.