Led by Juzang, No. 2 UCLA carries title hopes into season 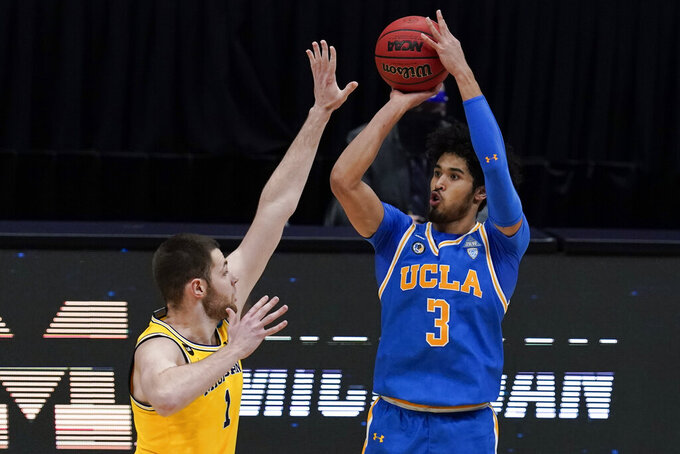 LOS ANGELES (AP) — Expectations are nothing new at UCLA. John Wooden's success made sure of that.

They accompany the start of every basketball season at the school that owns a record 11 NCAA titles. What’s different is that the Bruins could win it all for the first time since 1995.

Led by Johnny Juzang, they return nearly everyone and nearly 92% of the scoring from last season’s surprising Final Four run. They’re No. 2 in the nation, matching the school’s highest preseason ranking in The Associated Press poll since 2007-08, when the Bruins were coming off consecutive Final Four appearances.

“We’ve got the chance to do something so special,” Juzang said.

The Bruins were 22-10 last season. They finished fourth in the Pac-12, losing their last four games before landing in the NCAA Tournament as a First Four team. They beat Michigan State before defeating BYU, Abilene Christian, No. 2 seed Alabama and top-seeded Michigan. UCLA lost to top-seeded Gonzaga on a half-court bank shot in the national semifinals.

“If we taught anybody anything last year, your seed or your ranking does not matter come tournament time,” third-year coach Mick Cronin said. “I try to train them to worry about things that matter. What matters is you get better and if you get better, our team gets better.”

UCLA’s first Final Four appearance since 2008 earned Cronin a two-year contract extension. The deal worth a guaranteed $4 million per year runs through the 2026-27 season.

“My goal coming to UCLA was winning the 12th national championship,” Cronin said. “You come and sit where coach Wooden sat, you better be okay with that stuff.”

UCLA opens the season at home against Cal State Bakersfield on Nov. 9.

In a crucial move, Juzang decided to stay in school after withdrawing his name from the NBA draft. He averaged a team-high 16 points last season, his first in Westwood after transferring from Kentucky. He became a star during the NCAA Tournament, scoring 137 points over six games — second-most in history for a Bruins player.

He leads a backcourt loaded with depth and versatility that includes Jaime Jaquez Jr., Tyger Campbell, Jules Bernard and David Singleton. Cronin’s challenge will be dividing up the minutes among such a talented bunch. The Bruins landed highly coveted Peyton Watson from nearby Long Beach and Will McClendon from Las Vegas. Watson has the potential to be a breakout star who steals time from some of the veterans.

Cody Riley also took his name out of the NBA draft to return for his senior season. He started all 31 games, averaging 10 points and 5.4 rebounds despite an ankle injury. Rutgers transfer Myles Johnson adds an intimidating presence around the rim. He led the Big Ten in blocks as a junior with 68 and he fits well with Cronin’s favored style of physical and defensive play. Mac Etienne has bulked up for his sophomore year after helping plug last season’s injury-plagued frontcourt when he arrived midseason.

Chris Smith left the team after deciding not to take advantage of the NCAA's decision to allow seniors an extra year of eligibility due to the coronavirus pandemic. He injured his knee in January and was out for the rest of the season. Jalen Hill left the team in February for personal reasons and in April announced he was retiring from the sport, citing anxiety and depression.

The Bruins play five of their first eight games at Pauley Pavilion, where fans return after being kept away last season because of the pandemic. The run is highlighted by a visit from No. 4 Villanova on Nov. 12. They'll play four games in Las Vegas, the biggest one coming against No. 1 Gonzaga on Nov. 23 as part of the Empire Classic. On Dec. 18, the Bruins return to Sin City to face 19th-ranked North Carolina in the CBS Sports Classic. They open Pac-12 play at home on Dec. 1 against Colorado.