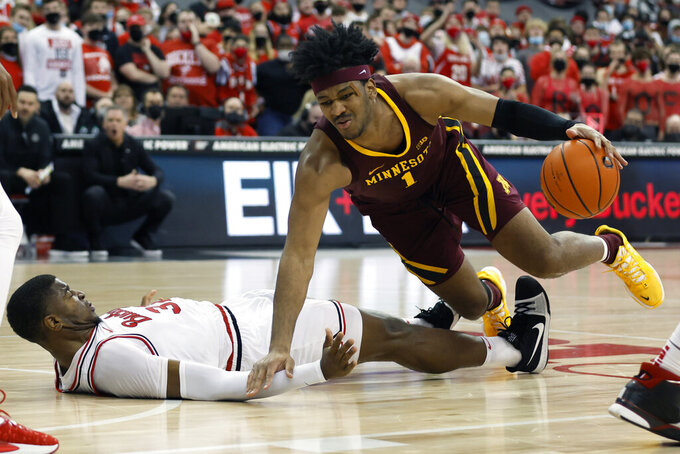 The Buckeyes trailed 25-23 at halftime. Ohio State shot 40.7% in the first half and committed eight turnovers.

“I know people think it was a tale of two halves,” Ohio State coach Chris Holtmann said. “I don’t really look at it like that.”

Jamari Wheeler kickstarted the second half with a 3-pointer that sparked a 16-4 run by Ohio State. He shot 5 of 8 from the field and had three 3-pointers.

Ohio State finished shooting 49.1% from the field, including 57.1% in the second half. The Buckeyes had a 36-29 advantage on the boards, and scored 28 points in the paint.

Minnesota pulled within eight points with 14:25 remaining, but shot 3 of 15 the rest of the way and lost for the sixth time in seven games.

“They really flipped the narrative in terms of their intensity level, their details on both sides of the ball,” Minnesota coach Ben Johnson said. “We just didn’t bring it.”

Ohio State made its first six shots of the second half to reclaim the lead for good.

The Buckeyes’ momentum translated to the defensive end as they forced Minnesota to shoot 27.3% in the second half and an overall figure that was Ohio State’s defensive best all season.

“I think it’s such a process for us as a group. It’s a climb that we have to make every day,” Holtmann said. “I think we’re getting a little bit better understanding.”

LIDDELL LIFT IN SECOND HALF

On just 2 of 4 shooting in the first half, Liddell’s streak of 32 consecutive games in double figure scoring was in jeopardy.

Then, the 6-foot-7 forward turned it up a notch and scored a team-high 12 points on 4-of-7 shooting in the second half alone. He also contributed a block at the defensive end.

“I’ve always said God has gifted him with the ability to score the ball,” Holtmann said. “He can roll out of bed and score the ball. That’s a great gift.”

After the first 2:20, Wheeler substituted out with a pair of early fouls.

Upon his return over six minutes later, he began to light it up, scoring 13 points for his highest total at home this season. He also had a steal before finishing with four fouls in the game.

“I was hard on myself,” Wheeler said. “I didn’t want to take that away from my aggressiveness on the defensive end because that’s what I do, so I just got to adjust with the game. I just had to stay in there and keep my head in the game.”

Minnesota: The Golden Gophers shot a season-worst 30.8% from the field. They opened the game with four makes in six attempts, and made just one bucket in the final 10:50.

“We had a lot of pieces that were working,” Johnson said. “We just couldn’t carry it over to the final 20 minutes.”

Ohio State: The Buckeyes matched their high for turnovers in their last six games in the first half alone. They limited the giveaways in the second, allowing just two turnovers.

Ohio State: Hosts Iowa on Saturday in a game that had been scheduled for Feb. 3.