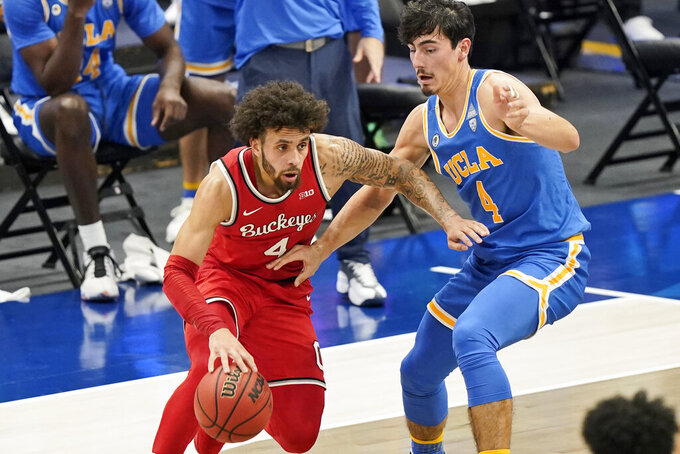 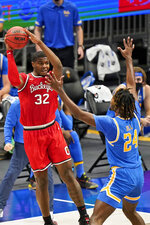 CLEVELAND (AP) — The return of E.J. Liddell helped Ohio State bounce back from its lone loss of the season.

Liddell had nine points and three rebounds after missing two games with an illness, allowing No. 20 Ohio State to hold off UCLA 77-70 at the CBS Sports Classic on Saturday.

The sophomore forward, who leads the Buckeyes in points and rebounds, had been sidelined since Dec. 8 with an ailment unrelated to COVID-19. He played 19 minutes before fouling out.

“When you get a player the caliber of E.J. back, it certainly helps you,” Ohio State coach Chris Holtmann said. “I thought this was our best performance of the year against a quality UCLA team that will either be near the top or win the Pac-12.”

Duane Washington Jr. scored 14 points and made two free throws in the final minute for the Buckeyes (6-1), who were coming off a 70-67 loss at Purdue on Dec. 16. Zed Key added 11 points, six rebounds and an emphatic blocked shot off the bench.

“Their physicality bothered us and Zed just destroyed us,” UCLA coach Mick Cronin said. “Our post defense was a big problem, then they had guys making 3-pointers who had barely hit any coming in.”

Eugene Brown III, who had two 3-pointers entering the game, nailed one from the left corner to put Ohio State in front for good at 66-63. The freshman made another from the same spot with 4:27 remaining to extend the Buckeyes’ advantage to 69-65.

“It was a great feeling for my teammates to trust me in a tight situation,” said Brown, who had a season-high nine points.

Tyger Campbell’s free throw pulled UCLA within 73-68 with 2:46 left, and neither team scored again until Washington’s free throws with 51 seconds left made it a three-possession game. Neither team led by more than six up to that point.

CJ Walker had 10 points and four assists for Ohio State, which shot 50% from the field. The Buckeyes led 39-38 at halftime behind seven points apiece from Liddell and junior Musa Jallow.

“We certainly weren’t perfect, but we got better efficiency from our backcourt tonight,” Holtmann said.

Pac-12 assist leader Campbell had a game-high five but missed nine of his 10 field goal attempts.

Ohio State was initially scheduled to play No. 22 North Carolina, while UCLA was paired up with Kentucky. The matchups were changed Wednesday by promoter Intersport to align the opponents with the most similar COVID-19 testing protocols.

The Tar Heels beat the Wildcats 75-63 in the first game of the afternoon. No fans were permitted inside Rocket Mortgage FieldHouse, which hosted the annual four-team event for the first time.

Ohio State played at Rocket Mortgage FieldHouse for the second straight season. West Virginia beat the Buckeyes 67-59 in the Cleveland Classic on Dec. 29, 2019, drawing a near-capacity crowd of 16,781 at the home of the NBA’s Cavaliers.

Ohio State: The Buckeyes have only left their home state twice, winning 90-85 at Notre Dame on Dec. 8 and losing 67-61 at Purdue on Dec. 16. That will change as Big Ten play picks up.

UCLA: The Bruins lost their season opener at San Diego State, but won their next five contests by a combined 101 points. Ohio State was the first ranked opponent that UCLA has played.