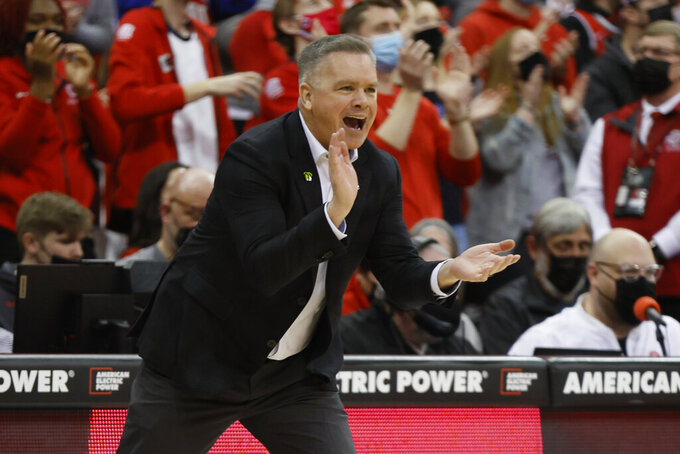 Ohio State head coach Chris Holtmann cheers his team on against Maryland during the first half of an NCAA college basketball game, Sunday, Feb. 6, 2022, in Columbus, Ohio. (AP Photo/Jay LaPrete)

“Good win for us against a Maryland team that’s really played well,” coach Chris Holtmann said. “We’re going to need to expect a lot of what we saw in stretches.”

The Terrapins got just six points from their reserves for the game, compared to 21 for the Buckeyes.

“The biggest thing is when you go on the road any time in general, you can’t let a team shoot 60% in a half,” Maryland interim coach Danny Manning said. “That’ll put you in a pretty big hole, which it did for us.”

It was Ahrens’ best offensive performance since scoring 16 points against Towson on Dec. 8.

Ahrens went 5 for 27 from 3-point range over the previous six games. He went 4 for 7 from deep against the Terrapins.

“It’s frustrating because it feels like the whole fan base is against you when you’re not doing what you’re supposed to be doing,” Ahrens said. “For me, it was just one day at a time just being an everyday guy.”

KEY PRESENCE IN THE PAINT

Key went 6 for 7 from the field and grabbed seven rebounds. He scored in double figures for the fourth time in six games.

“I was talking to the coaching staff and they said I need to be more consistent,” Key said. “They expect a lot of me every day in practice and in games.”

Maryland: Unable to overcome their slow start, the Terrapins lost for the fifth time in seven games.

Ohio State: The Buckeyes played their first Big Ten home game in three weeks. They moved to a perfect 10-0 on their home court.

“You’re not guaranteed anything at home,” Holtmann said. “To be at this point and be undefeated has been great.”