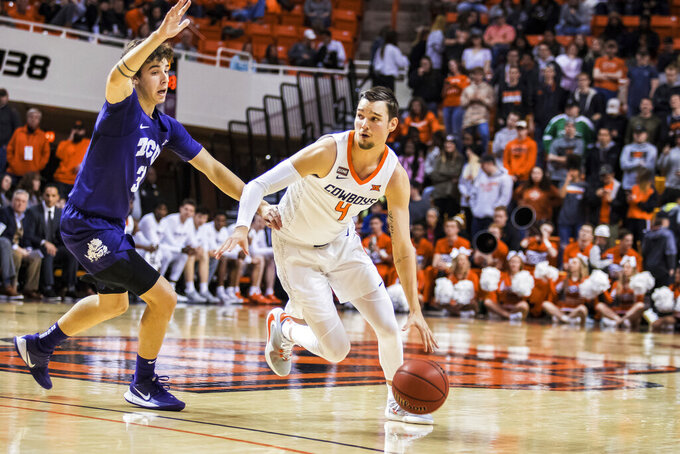 STILLWATER, Okla. (AP) — Isaac Likekele scored 15 points and 11 assists and for his first career double-double to help lead Oklahoma State to a 72-57 victory over TCU on Wednesday night.

Thomas Dziagwa and Yor Anei each scored 14 points for the Cowboys, who avenged a 52-40 defeat at TCU on Jan. 11.

Desmond Bane had 16 points, eight rebounds and six assists to lead TCU (13-9, 4-5), which has lost four in a row and six of its last seven. R.J. Nembhard added 14 assists and six rebounds.

The Horned Frogs capped a 6-0 run with Nembhard’s five-foot jump shot to pull to within 61-53 with 3:22 to play, but that was as close as they would get.

TCU: The Horned Frogs had several stretches of falling behind big, then battling back, but they could not pull it off one last time. They trailed most of the opening half, going down 24-17 with 9:02 left, then reeled off an 11-2 run over the next six-plus minutes, a stretch in which they forced Oklahoma State to miss 10 straight shots. Jaire Grayer’s two free throws with 2:45 remaining gave TCU its first lead, 28-26. Oklahoma State responded with a 12-2 run to go up 38-30 early in the second, but the Horned Frogs put together another big run, scoring 10 straight points to take back the lead again, 40-38 with 15:36 to go.

Oklahoma State: The Cowboys dealt with some injury issues, as senior starting guard Lindy Waters, second on the team in scoring (11.3 points per game) missed his first game since Jan. 3, 2018, a span of 75 games. He was out due to a facial fracture suffered in the Cowboys’ 82-69 loss at Oklahoma last Saturday. Guard Chris Harris Jr., who started for Waters, exited the contest after just 5:55 due to a lower left leg injury, and did not return. Harris couldn’t put any weight on his leg as he was helped off the court.

TCU: The Horned Frogs return home to face No. 3 Kansas on Saturday morning.

Oklahoma State: The path doesn’t get any easier for the Cowboys, who head to Waco on Saturday to take on No. 1 Baylor.