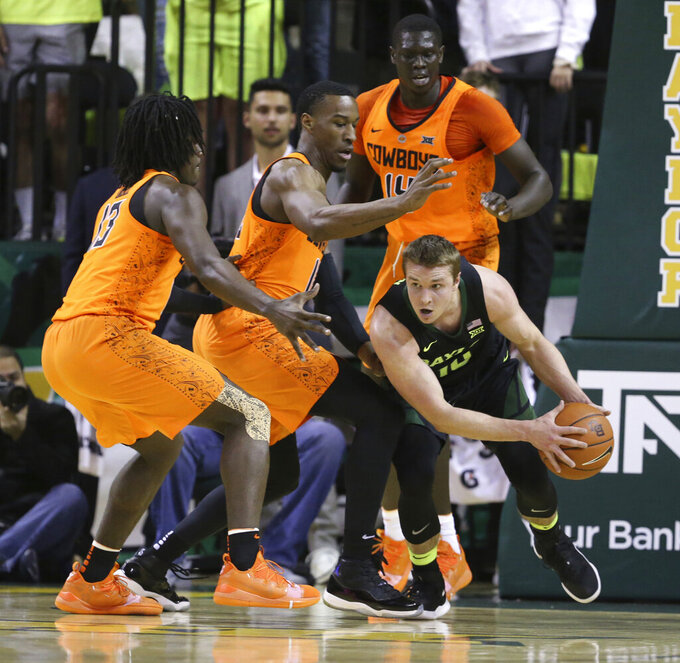 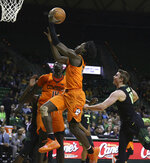 WACO, Texas (AP) — Oklahoma State got a glimpse of its future with a pair of freshmen that helped ruin Baylor's senior night.

"We were right there knocking on the door last week. We took (Texas) Tech to overtime on the road and had Kansas on the ropes Saturday at our place and just couldn't finish," Oklahoma State coach Mike Boynton Jr. said "It's a testament to these guys because even though they keep getting knocked away, they never stop coming back. I'm really excited about the future we have because we get all these kids back and add some more pieces."

Anei provided the Cowboys with their margin of victory when he made two free throws with 1:30 left and added a layup with 47 seconds left that made it 67-62.

The Bears led 53-51 after Devonte Bandoo made a 3-pointer, but Likekele scored six points and Anei the other two in an 8-0 run. The Oklahoma State defense locked Baylor up defensively during that stretch, including forcing back-to-back shot-clock violations.

"You've got to credit Oklahoma State with the way they defend. It's a lot of denial, so what you have is a lot of one-on-one play," Baylor coach Scott Drew said. "I thought against the zone we were stagnant. All season long when people have zoned us, we've hit 3s quick and they've gotten out of it. Today we didn't."

Baylor had a pair of chances to tie in the closing seconds. After Mario Kegler missed a 3-pointer from the left corner, the Bears kept possession after a wild scramble for the rebound with several players on the floor when officials blew the whistle with five seconds left. But King McClure's ensuing shot from the left wing came up well short of the rim.

Thomas Dziagwa finished with 11 points and eight rebounds for the Cowboys, who held Baylor to 25 percent (7 for 28) shooting in the second half. The Bears missed their last four shots from the floor and Jared Butler's 3-pointer at the 4:33 mark was their only field goal over the final 8:21.

Mason had 15 of his 19 points in the first half for the Bears. Freddie Gillespie was 6 for 9 in the post for 14 points.

Oklahoma State: The Cowboys won despite making only 5 of 29 3-pointers, with Dziagwa and Lindy Waters — two of the league's top 3-point shooters — combining to go 3 for 18. Likekele helped Oklahoma State balance that by driving to the basket at will for scores or assists. The Cowboys outscored Baylor 38-24 in the paint.

Baylor: The Bears had plenty of chances to blow this one open early, including when they scored the first eight points. They led by as many as seven in the second and had the crowd into it after back-to-back dunks by Gillespie early in the second half, but they soon began settling for jump shots early in the shot clock and couldn't find any offensive rhythm down the stretch.

Fourth-year senior guards McClure and Jake Lindsey, who both already have degrees from Baylor, were recognized before the game. McClure played his 125th career game since a defibrillator was implanted into his chest after a heart condition diagnosed when he first got on the Baylor campus as a freshman in summer of 2015. McClure switched from No. 24 to No. 3 this season to honor Lindsey, who had hip surgery last fall. Lindsey had hoped to return to play next season, but the son of Utah Jazz GM Dennis Lindsey revealed this week that his career is done because of a nerve issue in his left shoulder.

Oklahoma State is home for its regular season finale Saturday against West Virginia in a matchup of the teams tied for last place in the Big 12 standings.