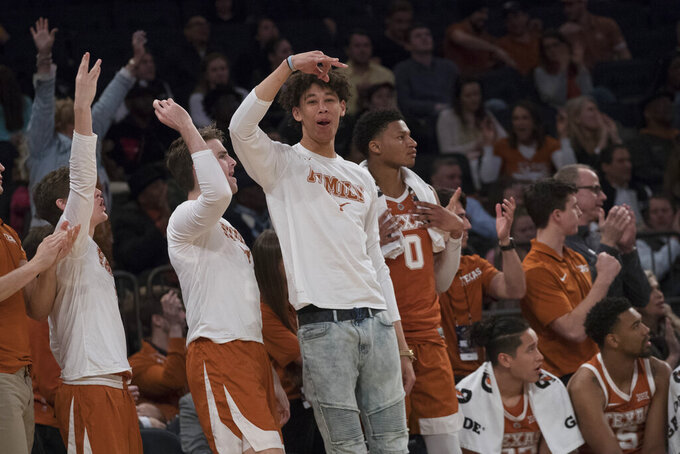 Texas players on the bench react during the second half of a semifinal college basketball game in the National Invitational Tournament against TCU, Tuesday, April 2, 2019, at Madison Square Garden in New York. Texas won 58-44. (AP Photo/Mary Altaffer)

The Bisons stole the spotlight in New York and Alexander wanted his team to know they had the mettle necessary to cut down the nets Thursday night in the NIT championship game.

"If somebody could ask me what I'd want from a team, it would be, tough," Alexander said in the locker room. "You guys coming back from 11 down with 8 minutes to go, freakin' tough."

The Bisons rallied to knock off Wichita State and advance to the NIT final for the first time in history. Up next, a date with Texas with a championship trophy and the claim of 69th best team in college basketball at stake.

It's Lipscomb vs. the Longhorns at MSG.

"Any time that a team is playing in late March and early April, it's a pretty big deal," Lipscomb guard Garrison Mathews said.

The Bisons (29-7) were a one-time NAIA power. But the school with less than 5,000 students mostly floated along in basketball obscurity, well behind the Tennessee Vols in popularity and prestige in the state.

Alexander took over in 2013 and the team moved from mediocrity during his first three seasons into legitimate ASUN contenders in 2016-17. The Bisons won 20 games and finished second in the conference, then won 23 games a year ago and made the NCAA Tournament. Lipscomb's reward, an 18-point loss in a game against No. 2 seed North Carolina.

Alexander had said he wanted his players to savor the experience even as they faced a daunting challenge. Lipscomb missed its last nine 3s of the first half as UNC surged ahead.

The Bisons seemed poised to make it two straight trips but fell to Liberty in the final of the ASUN Tournament. They had an impressive victory at bubble contender TCU (which lost to Texas on Tuesday in the NIT) early in the season. Two of their losses were to Belmont — by a total of six points — and they lost by four at Louisville.

The Bisons beat Davidson, UNC Greensboro and NC State to get to New York. Mathews swished his ninth 3-pointer of the game in front of an exuberant Lipscomb bench for the lead with 1:10 left in the game to send the Bisons on their way to the NIT championship in a 71-64 win over the Shockers. Mathews, named to The Associated Press All-America honorable mention team, scored 34 points in front of an MSG crowd of mostly Lipscomb fans.

"We had a sea of people come in all at once and I was pretty shocked about it," Mathews said. "It was kind of disappointing after the Liberty loss, but they are as resilient as we are coming back and cheering us on for these last games."

Thank goodness for the Bisons, a few hundred fans showed and made it loud behind the bench.

A year after NIT champion Penn State drew big, rowdy crowds to Madison Square Garden, the arena was nearly empty for both games at the NIT. The greater New York metro area would probably rather watch TV replays of Knicks losses than pay to watch two teams with scant connection to the city. StubHub had tickets in the prime 100 level going for $11 bucks a pop on Wednesday — which is at least cheaper than a concession stand beer.

Texas (20-16) avoided disaster with a third loss to TCU this season and rolled behind Kerwin Roach II and Dylan Osetkowski. The Longhorns are trying to win their first NIT title since 1978.

Coach Shaka Smart, just 70-66 in four seasons with the Longhorns, is reportedly on the short list of candidates to take the UCLA vacancy. Texas has not won an NCAA Tournament game under Smart and few Texas fans would weep if he left for the Bruins.

Leaving New York with a championship — even a second-tier title — would certainly buy Smart more time at Texas.

"We played with great energy, continued to have a commitment to defense," Smart said. "We don't want to stop playing."

No one does this time of the season — until it ends with a championship.