Longhorns use strong finish to pull upset at No. 23 Purdue 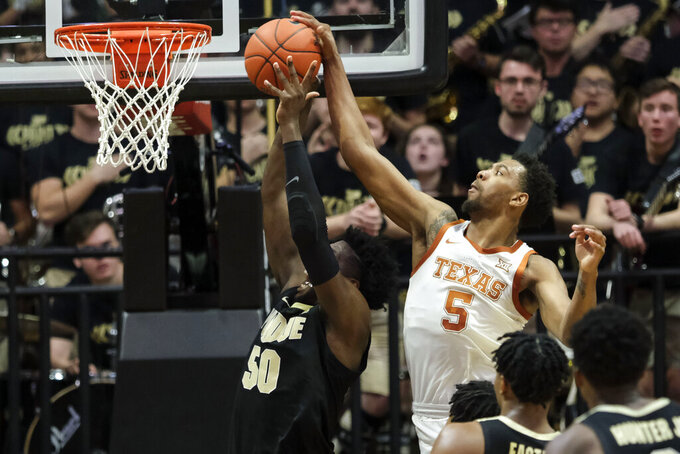 Texas forward Royce Hamm Jr. (5) gets his hand on the shot of Purdue forward Trevion Williams (50) in the first half of an NCAA college basketball game in West Lafayette, Ind., Saturday, Nov. 9, 2019. (AP Photo/AJ Mast) 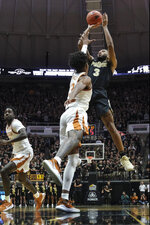 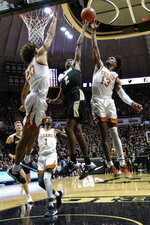 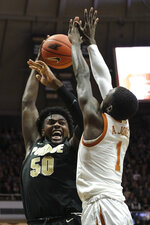 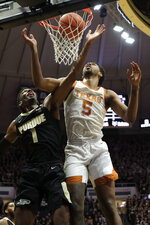 Eventually, all that work paid off.

The Longhorns forced three straight turnovers late in the game and took advantage of the miscues to score nine straight points, leaving town with a 70-66 upset over the No. 23 Boilermakers.

"The key for us was just hanging in there on defense even though they were bombing 3s in the first half," Texas coach Shaka Smart said. "That's a big no-no for us and our defense to give up 3s. So for them to hit those first five were huge. But I thought our guys hung in there and adjusted.""

It was a monumental moment for the reigning NIT champions.

Smart was more impressed, though, with Texas' ability to buckle down and grind out a victory even when all almost seemed lost.

"For our guys to come in here and withstand their runs, stay together and continue fighting a lot of mistakes, I think it says that we can be a really good team," Smart said. "We've got a long way to go."

Purdue was led by Sasha Stefanovic, who had 14 points, and Eric Hunter Jr. and Jahaad Proctor, who each had 12.

But the problem: A brutal sequence in which the Boilermakers couldn't do anything right.

When Aaron Wheeler fumbled the ball out of bounds, Liddell answered with a long jumper. When Matt Haarms was called for an offensive foul with 2:07 left, Jericho Sims responded with a dunk to make it 62-61. And when Hunter lost the ball off his knee, Jase Febres made the go-ahead 3-pointer with 1:25 to go.

The Longhorns never trailed again, closing it out at the free-throw line.

"Sometimes we get complacent, we got pretty complacent in the game after we got over the hump a few times and didn't seal the deal," Proctor said. "We had possessions down the stretch. We were up five with three minutes left, we just didn't finish."

Texas: The Longhorns passed a key early-season test by going into Mackey Arena and grinding out a victory the hard way. It's a promising start for the Longhorns.

Purdue: This one will sting. The Boilermakers seemed to be in control on their home court with a little more than three minutes to go and somehow let it slip away. They must take better care of the ball — and find ways to take advantage of their opportunities, too.

Texas: Coleman had four rebounds and seven assists. ... Febres finished with 11 points and Sims scored 10 despite playing most of the night in foul trouble. ... Texas was 9 of 22 on 3s and shot 53.3% from the field.

Purdue guard Nojel Eastern did not finish the game after appearing to take an elbow to the groin with 30.9 seconds to go. The refs stopped the game, reviewing the play and staying with the no-call.

It's been a tough few days for Eastern, who left Wednesday's opener twice with what appeared to be an injured wrist.

Texas heads home to face California Baptist in the first game of the 2K Empire Classic.

Purdue hits the road for another intriguing early-season contest against Marquette in this season's Gavitt Games. Marquette was ranked No. 29 in the preseason poll.