A look at who is unbeaten or winless in college basketball 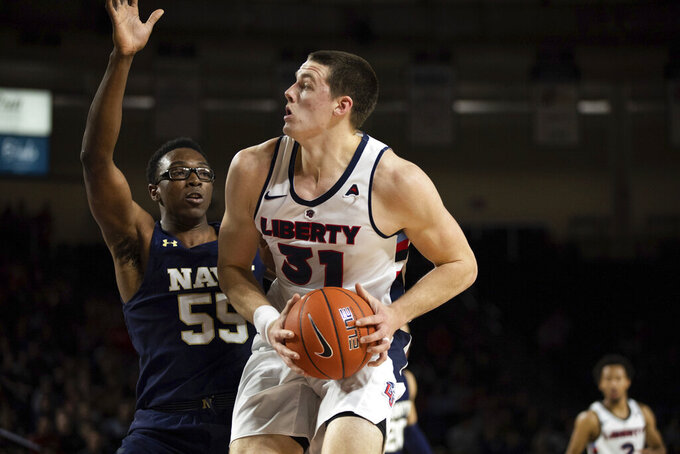 Liberty forward Scottie James gets ready to make a shot over Navy forward Richard Njoku during the Flames' win on Tuesday, Nov. 19, 2019 at the Vines Center. (Emily Elconin/The News & Advance via AP)

The ranks of the unbeaten were thinned out even more Tuesday night.

Louisville, Maryland and Butler all lost for the first time, falling to Texas Tech, Penn State and Baylor, respectively. That left just five undefeated teams in all of Division I. There are also four teams that haven't won a game yet.

Here's a look at each of the remaining teams that are either unbeaten or winless.

Best Start Since: 2013-14. The Buckeyes started 15-0 but did not ultimately have a great season, losing in their NCAA Tournament opener as a No. 6 seed.

Highlight So Far: Ohio State won 74-49 at North Carolina in the ACC/Big Ten Challenge, handing the Tar Heels their most lopsided home loss under Roy Williams.

Why They're Unbeaten: Kaleb Wesson is a force, averaging 14.1 points and 9.3 rebounds a game, and the Buckeyes are holding opponents to 33.3% shooting.

Why They're Unbeaten: The Tigers have picked up where they left off when they made it to last season's Final Four. Senior guard Samir Doughty is the team's leading scorer, and Isaac Okoro and Austin Wiley are shooting high percentages from the field.

Upcoming Challenge: Auburn hasn't had a marquee matchup on its schedule yet, but its Southeastern Conference opener at Mississippi State on Jan. 4 should be a tough one.

Best Start Since: San Diego State won its first 20 games in 2010-11. That Kawhi Leonard-led team lost only twice before the NCAA Tournament.

Highlight So Far: The Aztecs beat Creighton by 31 and Iowa by 10 on back-to-back days at an event in Las Vegas.

Why They're Unbeaten: Only two of their opponents have reached 70 points. The Aztecs were nearly knocked off by San Jose State this past Sunday, but a last-second 3-pointer by Malachi Flynn gave them a 59-57 win.

Upcoming Challenge: San Diego State already made it through one trip to Utah when it beat BYU on Nov. 9. The Aztecs head back to that state for a Jan. 4 matchup with Utah State.

Highlight So Far: The Dukes haven't been tested much, but they went to the Bahamas last month and beat Indiana State, Air Force and Loyola Marymount.

Why They're Unbeaten: The Dukes have six players averaging between 8.9 and 12.3 points per game, and center Michael Hughes already has 24 blocked shots.

Upcoming Challenge: Duquesne begins a stretch of four straight neutral-site games with an interesting matchup with Radford on Saturday.

Best Start Since: This is the first time Liberty has started 11-0.

Highlight So Far: The Flames beat Radford 66-60 in their season opener.

Why They're Unbeaten: The Flames won an NCAA Tournament game last season, so this early success should be no surprise. They're outscoring opponents by an average of 13.1 points a game from 3-point range while shooting 42.1% from beyond the arc.

Upcoming Challenge: Liberty hasn't played a very tough schedule so far, but the Flames go on the road to face Vanderbilt on Dec. 14 and LSU on Dec. 29.

Best Game: The Huskies led by six in the second half of their season opener at Tulsa before losing 80-72. They lost their next game by 14, and every defeat since has been by at least 23.

Why They're Winless: The Huskies are No. 1 in the nation in adjusted tempo according to Kenpom.com. That might work fine against lesser competition, but it hasn't been terribly conducive to upsets during a tough nonconference schedule that's included Michigan, Houston and Dayton. Houston Baptist has already allowed at least 110 points three times.

Possible Win: Houston Baptist has only played one true home game this season. The Huskies get another when they host Central Arkansas on Jan. 2.

Best Game: The Rattlers lost 85-82 to South Dakota in their final game of a trip to Hawaii last month.

Why They're Winless: The Rattlers have made only 19 3-pointers all season. Not exactly a recipe for an upset.

Best Game: The Owls nearly ended their winless skid last weekend but came up short in an 84-81 loss to Florida International.

Why They're Winless: They're shooting only 34.5% from the field — and that's when they manage to get any shot off at all. They are also averaging 18 turnovers a game.

Possible Win: Kennesaw State won only three games in Atlantic Sun play last season, so even when the conference schedule starts, this could stay ugly for a while. The Owls have a home game against Stetson on Jan. 4. That's one of the teams the Owls beat last season.

Best Game: The Blue Devils lost 73-71 at UMass Lowell in a tight game decided in the final seconds Dec. 1. They also lost by two at home against Maine.

Why They're Winless: Even with those two close losses on their resume, the Blue Devils have still been outscored by an average of over 20 points per game. They don't have a single player averaging more than 10.3 points.