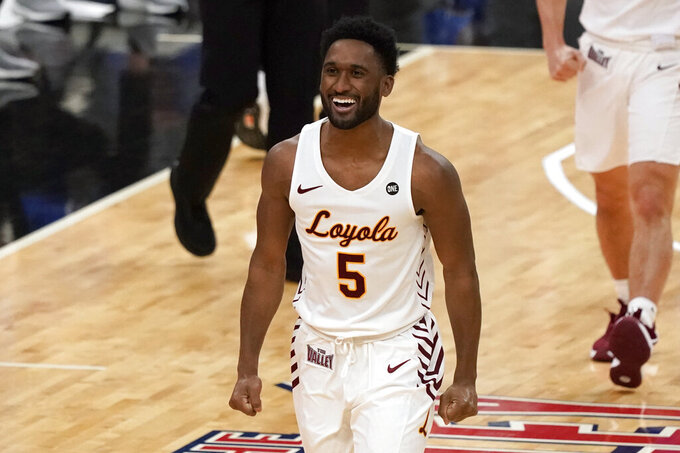 Loyola of Chicago's Keith Clemons (5) celebrates during the first half of the championship game against Drake in the NCAA Missouri Valley Conference men's basketball tournament Sunday, March 7, 2021, in St. Louis. (AP Photo/Jeff Roberson)

ST. LOUIS (AP) — Cameron Krutwig and Braden Norris scored 20 points apiece to lead No. 20 Loyola Chicago to a 75-65 win over Drake in the Missouri Valley Conference championship game Sunday for a spot in the NCAA Tournament.

Keith Clemons added 13 points for Loyola, which has won six in a row and 17 of its past 18.

Tremell Murphy and D.J. Wilkins scored 20 points each for Drake (25-4, 15-3), a bubble team. The Bulldogs were appearing in the MVC title game for the first time since they won the tournament in 2008. Joseph Yesufu added 12 points.

Krutwig, the MVC Player of the Year, had eight rebounds. He sent Loyola Chicago on a 7-0 run with a hook shot from the lane that broke a 24-all tie.

“We wanted to be physical without fouling,” Krutwig said. “We were all over the court."

Krutwig was a member of that 2018 team that gained nationwide attention with its improbable run to the Final Four.

He feels as if it could happen again.

“It makes you hungry and want to get back there,” Krutwig said. “We'll enjoy this win for one or two days then it's right back to business. Once we find out who we're playing, we'll get right to it. You've got to fall in love with the grind — especially in March.”

Loyola coach Porter Moser says his team is ready for the challenge.

“I welcome similarities,” Moser said. “I've been shying away from comparing them. These guys — they're their own team. But I love the sustained success.”

Loyola used a lock-down defensive effort in the second half to seal the win.

“It's a culture here," said Norris, who hit five 3-pointers. ”You have to play defense to play in this program."

Loyola had held its opponents to 58 points or fewer in its previous 17 games before Sunday.

“They're terrific defensively, they make everything hard," Drake coach Darian DeVries. ”They have great hand activity, they have toughness on the ball. They're really connected as a group."

Clemons hit a 3-pointer midway through the second half to push the lead to a 53-37.

Drake won its first 18 games of the season. It was playing without regulars Roman Penn and ShanQuan Hemphill, who suffered leg injuries in February.

The Bulldogs must now wait until Selection Sunday to find out their fate.

“We did everything we could,” Wilkins. “Whatever happens, happens.”

Doug Elgin, MVC commissioner for the past 33 years, will step down in June. Elgin moved the tournament to St. Louis in 1991 and is given credit for coining the term Arch Madness. He is the longest-tenured commissioner in the 114-year history of the league.

“March Madness is what it is because of our commissioner,” Moser said.

The MVC is the only league in the nation that was able to complete every regular-season conference game. All 10 teams played 18 games each.

Loyola Chicago: Heading to the NCAA Tournament for the seventh time and first since the 2018 team reached the Final Four.

Drake: Hoping for an NCAA at-large berth. The Ramblers have won 69 games over the past three seasons, tying for the most in a three-game stretch in program history.

Chicago Loyola: Will be making its second NCAA Tournament appearance in the past 31 years.