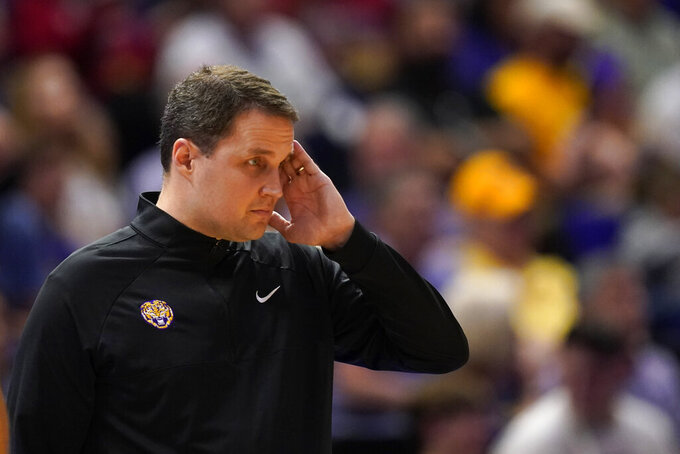 LSU head coach Will Wade walks along the bench in the first half an NCAA college basketball game against Alabama in Baton Rouge, La., Saturday, March 5, 2022. (AP Photo/Gerald Herbert)

LSU has fired men's basketball coach Will Wade for cause amid “serious” allegations of NCAA violations, the university announced Saturday in a joint statement from its president and athletic director.

The firing comes the day after LSU was bounced from the Southeastern Conference Tournament by Arkansas, 79-67, in a quarterfinal game Friday night.

“For more than four years, the University has patiently allowed the NCAA investigative process to unfold, jointly working with the NCAA Enforcement Staff and, subsequently, with the Complex Case Unit (CCU), to ensure the evidence collected was as thorough and fair as possible,” said the statement signed by President William F. Tate and athletic director Scott Woodward. “Throughout that time, the University and its men’s basketball program have operated under an exhausting shroud of negativity.”

Wade did not immediately return a message left on his personal phone by The Associated Press. The allegations against him stem from a wide FBI investigation into corrupt practices in college basketball that has implicated major programs including Arizona, Kansas, Louisville, Oklahoma State, North Carolina State and Auburn.

The Complex Case Unit this past week issued LSU a formal notice of allegations, which “contains serious allegations, including multiple charges alleging Coach Wade’s personal involvement in — or awareness of — Level I misconduct,” the LSU statement said. “We can no longer subject our University, Department of Athletics, and — most importantly — our student-athletes, to this taxing and already-lengthy process without taking action. Our responsibility to protect and promote the integrity and well-being of our entire institution and our student-athletes will always be paramount.”

Level I violations can include a head coach's lack of oversight on compliance matters; failure to cooperate in an NCAA investigation; unethical or dishonest conduct; or prohibited cash or similar benefits provided to recruits.

LSU's statement, however, stressed that Wade's firing was “not an acknowledgement of agreement with any of the allegations. The University will determine its positions on the allegations after an exhaustive and objective examination of the relevant facts.”

Suspicion of wrongdoing has followed Wade since 2019 reports about leaked excerpts of an FBI wiretap that captured Wade speaking with a person convicted of funneling illegal payments to the families of college basketball recruits.

In transcripts of the phone call, Wade discussed presenting a “strong” offer to an apparent third party who represented then-LSU player Javonte Smart, who has since turned pro.

Wade was suspended for LSU's 2019 regular-season finale and the postseason before being reinstated later that spring with an amended contract stating that LSU could fire him for cause if he was found to have committed serious NCAA violations.

It was not clear from the leaked transcripts whether Smart himself knew about the offer, and after being held out for LSU’s regular-season finale, he was cleared to play in the SEC and NCAA tournaments. Wade, meanwhile, was replaced for the regular-season finale and the postseason on an interim basis by assistant Tony Benford.

Wade, 39, was hired by LSU in 2017 after a successful two-year stint at Virginia Commonwealth. He went 105-51 at LSU (not counting games for which he was suspended).

LSU won the 2019 SEC regular-season crown in just Wade's second season. Last season, the Tigers advanced to the SEC Tournament final for the first time since 1993, narrowly losing to Alabama.

Wade's departure comes as part an apparent housecleaning by Woodward, a Louisiana native who was lured away from Texas A&M in April 2019. Since then, he has plucked football coach Brian Kelly from Notre Dame to replace Ed Orgeron, Hall of Fame women's basketball coach Kim Mulkey from Baylor to replace Nikki Fargas, baseball coach Jay Johnson from Arizona to replace Paul Mainieri and now is launching a men's basketball coaching search.

Political pundit James Carville, an LSU graduate and New Orleans resident who knows Woodward personally, predicted that the Tigers’ next coach “will have won a lot of basketball games somewhere else.”

Woodward, Carville added, is a “proven commodity type of guy.”