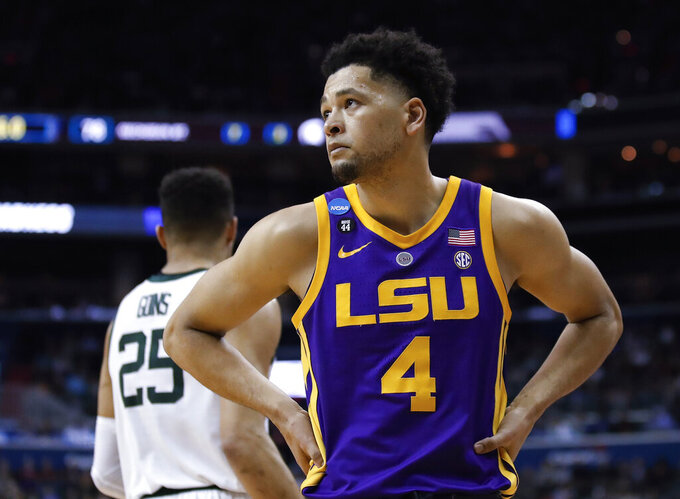 WASHINGTON (AP) — LSU players were able to push aside thoughts about suspended coach Will Wade and the program's scandal because they were still alive in the NCAA Tournament.

Now that their season is over, questions abound on Wade's status and the potential exits of key players to the NBA Draft. Third-seeded LSU was eliminated in the Sweet 16 on Friday night in an 80-63 loss to second-seeded Michigan State, and soon more ramifications from an FBI corruption investigation could be felt in Baton Rouge, Louisiana.

"Obviously we don't know what's going on," sophomore point guard Tremont Waters said. "We're just going to keep doing what we've been doing, stay in the gym and pretty much talk to our families and see what the next step is."

Wade has been suspended since March 8 amid concerns about whether his recruiting tactics violated NCAA rules. Reports surfaced that he was caught on a wiretap saying he'd "take care of" freshman Javon Smart and his mother, and Wade is expected to appear at a federal trial April 22.

Wade has declined to discuss the allegations with his bosses at LSU, including athletic director Joe Alleva, citing legal advice. That prompted LSU to suspend him. Wade is in his second season with LSU.

Freshman forward Naz Reid said if Wade is fired the team will "just move on accordingly." Reid and Waters were noncommittal about possibly leaving school to enter the NBA Draft, though an exodus could be coming, especially given the scandal LSU is embroiled in.

"Well, we're definitely losing a few people that are probably going to go to the draft," junior guard Marlon Taylor said. "It's definitely sad losing your brothers, but they're going on to bigger and better things so I wish them well."

No one knows what will happen at LSU in the coming days, weeks and months, and interim coach Tony Benford was unprepared to address that after his team's tournament exit.

"We just played a game against a really good basketball team," Benford said. "I'm not even thinking about it, to be honest with you."

There will be plenty of time to think now. The Tigers go from rallying around Wade's absence to wondering if he'll ever coach again.

"I'm praying for him," Smart said. "I hope he can come back and be a good coach at LSU. You never want to see him not coaching."

Smart said his mother has been telling him to try to focus on the season and ignore all the talk about Wade. That was easier said than done.

"I tried not to look at it, but you know it's all people talk about. It's all they say, 'Will Wade,'" Smart said. "Now that we lost, I'm just not going to worry about it."

Playing without Wade became the new normal for LSU in recent weeks, a period Waters called "indescribable." It brought the team together even though soon players and coaches could disperse to the ends of the college and pro basketball worlds.

"Going through the season wasn't as bad as anyone would think it was," Reid said. "But it was definitely something we had to fight to get over."