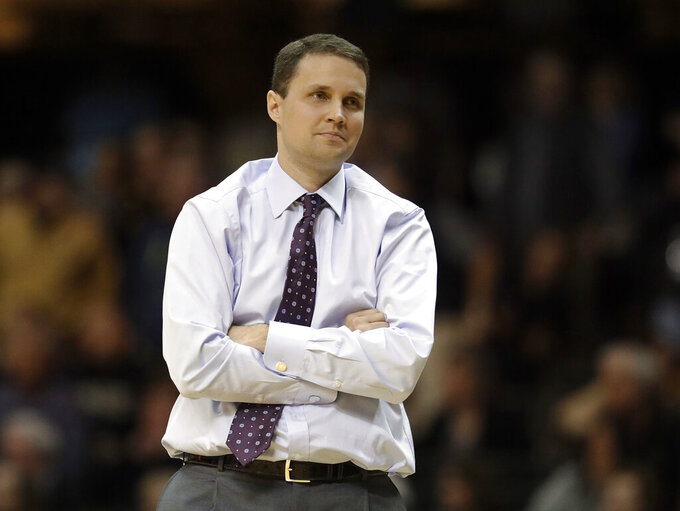 FILE - In this Jan. 20, 2018, file photo, LSU coach Will Wade watches from the sideline during the second half of the team's NCAA college basketball game against Vanderbilt in Nashville, Tenn. LSU officials say their first meeting with suspended coach Wade has taken place but that there is not yet a resolution regarding Wade’s long-term status. A written statement from the university says “it is unlikely LSU makes any decisions today regarding Coach Wade.” (AP Photo/Mark Humphrey, File)

The move came two days after a Wade met with LSU and NCAA officials, during which Alleva said the second-year Tigers coach "answered all questions and denied any wrongdoing in connection with recently reported allegations of irregularities in college basketball recruiting."

LSU was having one of the better seasons in program history under the 36-year-old Wade when he was suspended indefinitely. His punishment came on the heels of a Yahoo report about leaked excerpts of an FBI wiretap that captured Wade speaking with a person convicted funneling illegal payments to the families of college basketball recruits.

In transcripts of the phone call, Wade discussed presenting a "strong" offer to an apparent third-party who represented then-recruit Javonte Smart. It was not clear from the leaked transcripts whether Wade in fact violated NCAA rules or if Smart, a freshman who started 18 games this past season, knew about the offer.

Friday's meeting marked the first meaningful face-to-face communication between all parties since LSU suspended Wade for initially refusing to meet with school officials on March 8.

"The university regrets that Coach Wade did not choose to fulfill his obligations to LSU when he was first asked to do so," Alleva said. "However, the seriousness of the allegations and coach Wade's prior refusal to refute them could not be ignored without exposing the university and the basketball program to great risk."

After being held out for LSU's regular-season finale, Smart was cleared to play in the SEC and NCAA tournaments. Wade, meanwhile, was replaced for the regular season-finale and the postseason on an interim basis by assistant Tony Benford.

"I sincerely apologize to the university and our fans for the disruption to the university and the program," said Wade, who was advised by his previous attorney not to meet with LSU officials until it was clear whether he'd be called to testify in a federal trial against the person to whom he spoke on the wire-tapped call.

Wade has since changed his representation, hiring Chicago-based attorney Steven Thompson, who has represented universities, coaches, athletes and governing bodies in matters before the NCAA and the USOC.

LSU, which won the SEC regular-season championship, lost in the third round of the conference tournament against Florida after receiving a double bye. The Tigers then advanced past the first two rounds of the NCAA Tournament before falling to eventual Final Four participant Michigan State. LSU finished 28-7, tying the 2000 Tigers for the second most single-season victories in program history — behind only the 1981 Final Four team that went 31-5.

"I regret the circumstances that prevented me from meeting with the university sooner. I wish I could have addressed these issues when the University first requested a meeting, and I'm grateful they gave me the opportunity to do so last week," Wade said. "I completely understand that without my denying or explaining the media reports accusing me of wrongdoing, LSU was left with no choice but to suspend me.

"I look forward to re-joining the team right away," Wade continued. "I intend to sit down with my student-athletes and co-workers to explain what has happened during the last 30 days and how I intend for us all to move forward."