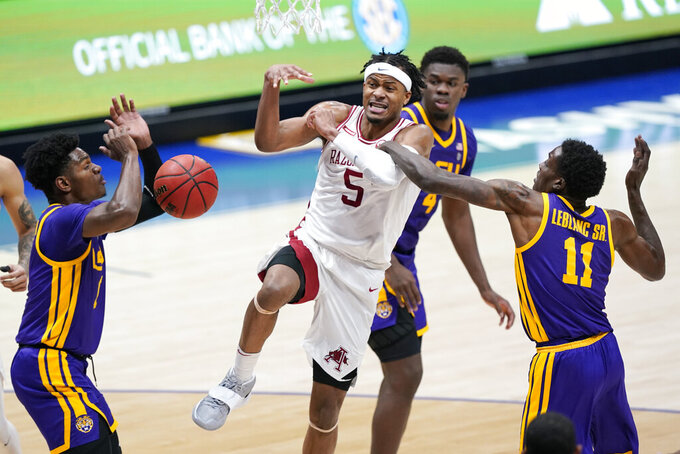 Arkansas' Moses Moody (5) loses the ball as he drives against LSU's Josh LeBlanc Sr. (11) in the second half of an NCAA college basketball game in the Southeastern Conference Tournament Saturday, March 13, 2021, in Nashville, Tenn. (AP Photo/Mark Humphrey)

NASHVILLE, Tenn. (AP) — The LSU Tigers wanted another shot at Alabama. The opportunity to take the first Southeastern Conference Tournament title home since 1980 means so much more.

“Bringing the 'ship back home man would mean a lot to all of us," said Javonte Smart, a junior guard and Baton Rouge native. "So I think that’s the biggest thing, just bringing it back home and showing that we are really, really, really good.”

Cameron Thomas scored 21 points and third-seeded LSU upset eighth-ranked Arkansas 78-71 on Saturday to reach the title game for the first time since 1993.

The Tigers (18-8) will play No. 6 Alabama — a 73-68 winner over Tennessee in the first semifinal — on Sunday looking to improve their NCAA Tournament seeding even more by knocking off the SEC's regular-season champ. LSU has won this tournament only once — back in 1980.

“It was just a huge, huge win,” LSU coach Will Wade said. “First time since ‘93 we’re going to play for the championship ... So very, very excited. Our guys are really excited.”

The teams split during the season, winning on their home courts by almost identical margins. On this day, LSU gave its top scorer and freshman more help in a matchup of the SEC's top scoring teams. Smart added 19 points for LSU, Darius Days had 13 and Eric Gaines added 10.

Arkansas (22-6) snapped a 12-game SEC winning streak that tied the program record set by the 1993-94 team that also ended in the SEC Tournament in the semifinals. Coach Eric Musselman insisted he wasn't thinking about the streak much.

Moses Moody tied his season high with 28 points for Arkansas, 20 of those in the first half as he hit his first six shots a game after the SEC Newcomer of the Year was held to five points. Justin Smith added 21.

“It’s definitely difficult," Smith said of snapping the streak. "When you’re on a run like that, you kind of get used to it. I don’t think we ever got complacent or anything like that, but it definitely hurts. Losing hurts every time regardless, and we really wanted this game.”

The Razorbacks came in leading the SEC with 82.8 points a game. Yet they couldn't knock down a shot for nearly 10 minutes in the second half, going without a basket between Smith's layup with 17:12 left and Smith's dunk with 7:24 remaining.

LSU took advantage after Arkansas guard Davonte Davis made a pair of free throws with 11:42 left tying it up at 52. The Tigers LSU reeled off 12 straight points to take the lead for good, and Gaines capped the spurt with a layup with 7:25 left.

Arkansas tried to rally, getting to 65-60, then Smith keyed a 9-2 spurt to make it 72-71 with 37 seconds left. LSU scored the final six points to finish off the victory.

LSU: The Tigers made sure to take advantage of their second chances, outscoring Arkansas 17-6 in that category despite being outrebounded 42-39.

Arkansas: The Razorbacks trailed at halftime for the sixth time since their SEC-winning streak started, and this was the fourth in the last five games. ... The Razorbacks were the SEC's fourth-best free throw shooting team in the regular season, but they went just 11-of-19 (57.9%) against LSU. They also turned it over 11 times in the second half that LSU turned into 16 points.

Smart scored four of the final four points to help seal this victory. He hit a floater with 26 seconds to answer after Arkansas pulled to 72-71, then he added two free throws. Wade said that's what great guards do.

“They were hounding him and pressuring him all over the all over the court," Wade said. "I thought he played a really, really good floor game. He attacked the pressure and that was good a shot as you see at the end. That was a big-time, big-time floater, big time, big time shot.”

LSU gets a third chance at Alabama after being swept by the Crimson Tide during the regular season.

“We’ve got to figure out something if we can, you know, keep it close to Bama,” Wade said.