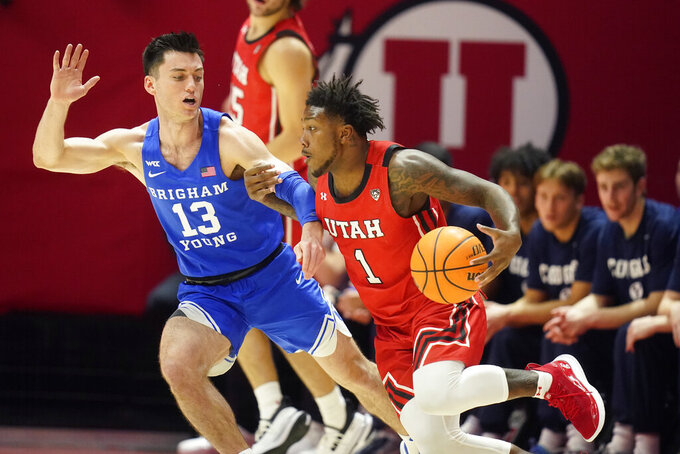 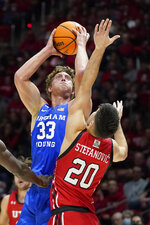 SALT LAKE CITY (AP) — No. 18 BYU leans heavily on senior Alex Barcello. So when Utah tried to take Barcello away on Saturday night, Te’Jon Lucas was more than ready to grab the reins for the Cougars.

Lucas scored a season-high 18 points to lead BYU to a 75-64 win over Utah. In doing so, the Cougars stayed undefeated.

Lucas, a senior transfer who has played at Illinois and Milwaukee, made 8 of 10 shots and two 3-pointers as his teammates struggled from outside.

“Alex is a great player and they were definitely trying to take some things away, so I was out there trying to make the right play," he said. “Tonight, shots were really falling for me.”

Barcello still ended up with 17 points, most of them coming late in the game as he controlled the ball and went 11 of 12 from the free throw line.

“Te’Jon gives us a luxury of manipulating where Alex is," BYU coach Mark Pope said. "We don’t actually have to have the ball in Alex’s hands. He can be really effective without the ball.”

“We were defending a lot better in the second half and we just kept rebounding and things started to go our way. Then we had more pace and were a little bit quicker on the offensive end,” said Lohner, who originally committed to Utah before switching to BYU.

Brendan Carlson had 17 points and Rollie Worster had 13 for the Utes (5-1), who suffered their first defeat of the season after five straight wins under new coach Craig Smith.

The Cougars outrebounded the Utes, who were third in the nation in rebound margin, 45-28 and had a 48-28 scoring advantage in the paint.

“We told our guys all week this is going to be a man’s game," Smith said. “You got to make all those physical plays.”

Still, the Utes were scrappy and stayed within striking distance until the final minutes, when their inability to grab a rebound clinched the game.

The Utes cut the lead to six several times but the Cougars always had an answer, shooting 56% from the field in the second half that included a number of layups and dunks.

Utah sprinted to a 7-0 lead in the first and led 29-27 at the half, led by Stefonovic’s eight points. Both teams played high-pressure, intense defense. Open shots were few and many attempts came late in the shot clock.

Early in the game, Ute senior big man Dusan Mahorcic left the game with an apparent knee injury, and that was after leading rebounder Marco Anthony was ruled out before tipoff with a sprained ankle.

“This was the highest-rated rebounding team we have faced and clearly hurts them not to have Anthony and Dusan, but we rebounded so well and it is saving us because there are other things we aren’t doing great right now,” Pope said.

Utah hadn’t lost to BYU on their home court since 2011.

BYU: The Cougars showed some nerves early in this rivalry game, but showed poise and composure down the stretch, grabbing big rebounds and converting their free throws. Their interior strength proved the key to thwarting Utah’s pressure defense.

Utah: In their toughest test yet, the Utes stayed with the Cougars for much of the game but missed Anthony and Mahoric on the boards. The Utes' half-court motion offense wasn’t producing the open shots they’ve seen in early-season games.

BYU has a slogan of “Mo’ Better, Less Worse” to emphasize getting more shots and refining the shot selection. With more offensive rebounds and more steals, the team is going to get more shot attempts — and probably easier attempts.

“All our analytics push us back to that simple statement,” Pope said.

Against Utah, the players responded with 18 offensive rebounds and six steals while holding Utah to 42% shooting. Mo’ better, indeed.