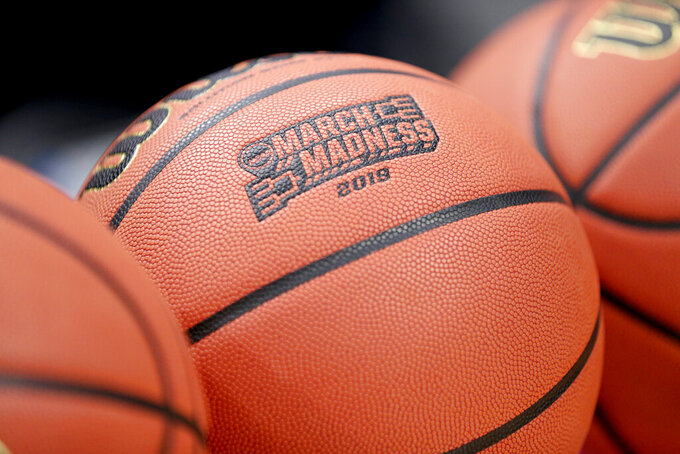 FILE - This Wednesday, March 20, 2019, file photo shows a basketball with March Madness 2019 in a rack before Michigan practice at the NCAA college basketball tournament in Des Moines, Iowa. An Ohio man has made history with a March Madness bracket that's perfect through 48 games on the NCAA.com's "Bracket Challenge," according to the NCAA. (AP Photo/Nati Harnik, File)

COLUMBUS, Ohio (AP) — An Ohio man has made history with a March Madness bracket that's perfect through 48 games on the NCAA.com's "Bracket Challenge," according to the NCAA.

Gregg Nigl of Columbus told The Columbus Dispatch he almost didn't fill out his bracket last week, saying he was home sick just hours before the deadline. But he felt bad about not entering a bracket in his friend's tournament group.

Instead, he correctly predicted every game through the first two rounds of the 2019 NCAA tournament.

The NCAA bracket tracker says the bracket is the only perfect one remaining across all major online bracket games, including Yahoo, ESPN, CBS, Fox, Sports Illustrated and the NCAA's own contest. It's the longest streak of correct bracket picks, breaking the reported record of 39 games, which happened in 2017.

The NCAA says the odds of a perfect bracket are 1 in 9.2 quintillion — so bettors, take the under.

Nigl, 40, said he researched his picks, doing his homework after the tournament field was unveiled, including watching some of the bracket shows on TV.

In addition to his historic bracket, two of Nigl's other three brackets are in first place in their groups, the Dispatch said.

Nigl has been watching the games closely, stopping on a recent trip with his wife at a brewery in Erie, Pennsylvania, to watch Michigan beat Florida in the Round of 32. Nigl, who grew up in Michigan, is a lifelong Wolverines fan.

In his perfect bracket, Nigl has No. 1 Gonzaga beating No. 2 Kentucky for the national title. Duke and Virginia round out his Final Four.

While Nigl likes how he picked the remaining games, he isn't counting on his bracket to stay perfect.

"Seeing the odds of a perfect bracket up until this point, I'm not very confident that it will stay that way," Nigl said. "But anything can happen."