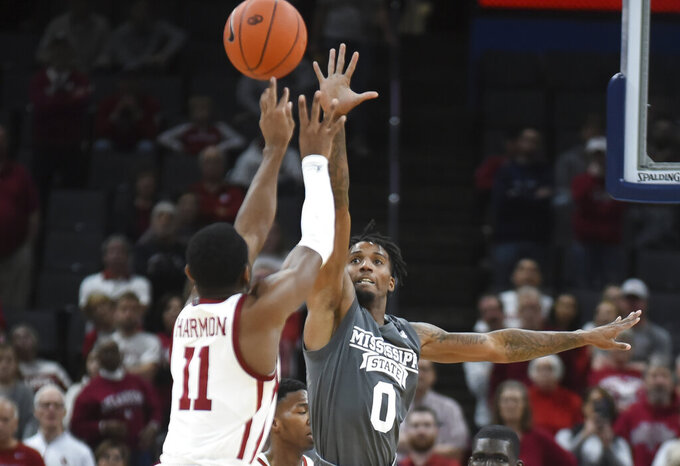 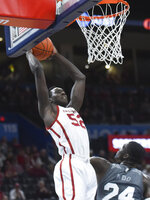 OKLAHOMA CITY (AP) — On a day in which Oklahoma and Mississippi State both shot below 40 percent, it was fitting that a defensive stop decided their game on Saturday.

Mississippi State could have won at the end, but with his team trailing by a point, Robert Woodard II missed a jumper from near the free-throw line and the Bulldogs couldn't get another shot off. Brady Manek scored 18 points, and Oklahoma held on for a 63-62 win in the Big 12/SEC Challenge, a game played at Chesapeake Energy Arena.

Mississippi State coach Ben Howland blamed himself for the outcome.

“This loss is totally on my shoulders," he said. “I did a horrible job the last 15 seconds of this game not setting something up for us to be successful. Typically, you want to attack. We didn’t have any timeouts left, but our players knew we had to get to the rim, to the basket, not a jump shot where you got no chance to get fouled. We haven’t worked on that enough this year.”

“Anytime you’re in that position, you want to avoid the fast layup, or obviously a three,” Kruger said. “A lot of games are won or lost at that point, and I thought the stop of the ball going downhill was critical.”

The Sooners got a solid non-conference win that could be important come Selection Sunday.

“It was a huge game for both teams, and I think we played like it,” Kruger said. “Every game is going to be like that. Mississippi State is going to win a lot of ball games this year, and that will help us when the seeds come out.”

Alondes Williams added a career-high 13 points for the Sooners (13-6).

Perry was called for a technical foul and picked up his third personal with 12:47 left in the first half. Oklahoma took advantage for a while and led by 15 before Mississippi State rallied with Perry on the bench. The Sooners held on to lead 38-30 at the break.

Mississippi State dominated the early part of the second half, and Perry banked in a 3-pointer that tied the game at 38.

Williams responded with a 3-pointer, then a breakaway dunk. An alley-oop dunk by Kur Kuath on a lob by Jamal Bieniemy put the Sooners up by seven.

Oklahoma bounced back again. A reverse layup by Manek put the Sooners up 63-59 with just over two minutes to play. Carter made a 3-pointer with 1:10 to go, but those were the Bulldogs' last points.

“We had the ball in our hand and a chance to win the game,” Howland said. “It is again, totally on me.”

Mississippi State: It was a missed opportunity for the Bulldogs to build momentum. Mississippi entered the game on a three-game win streak.

Oklahoma: The Sooners were able to get a quality win, despite shooting 38.7% from the field. They did it by holding Mississippi State to 38.3% shooting.

He only played five minutes in the first half.

“He is our best player and has been playing incredibly well the last three games," Howland said. “The technical foul hurt us because we had to sit him the rest of the half.”

Perry did not start the second half. Overall, the 6-foot-10, 250-pound sophomore made 3 of 7 shots and had six rebounds.

Mississippi State: At Florida on Tuesday.

Oklahoma: At Kansas State on Wednesday.