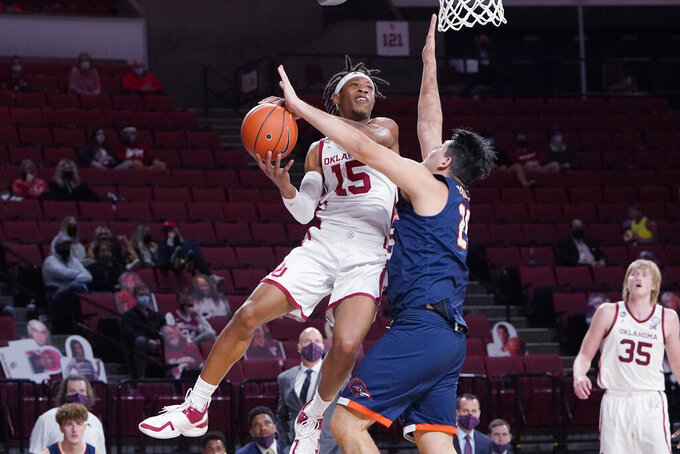 Oklahoma guard Alondes Williams (15) goes up for a shot in front of UTSA forward Adrian Rodriguez (25) during the first half of an NCAA college basketball game Thursday, Dec. 3, 2020, in Norman, Okla. (AP Photo/Sue Ogrocki)

NORMAN, Okla. (AP) — Brady Manek made a career-high eight 3-pointers and finished with 29 points as Oklahoma won its season opener with an 105-66 rout of UTSA on Thursday night.

De’Vion Harmon had 22 points for Oklahoma (1-0), which was originally scheduled to open with UTSA (1-2) on Nov. 25. The Sooners, who had games against Central Florida and Florida canceled, returned over 70% of their scoring from the 2019-20 team that claimed third in the Big 12.

Jhivvan Jackson led UTSA with 28 points, on 10-of-21 shooting, including four 3-pointers.

The Sooners' highest point total last season was 91. They did it twice, the last against Texas-Rio Grande Valley on Dec. 30. Oklahoma’s 54 second-half points against UTSA also matches its highest from last season in a win against Maryland-Eastern Shore.