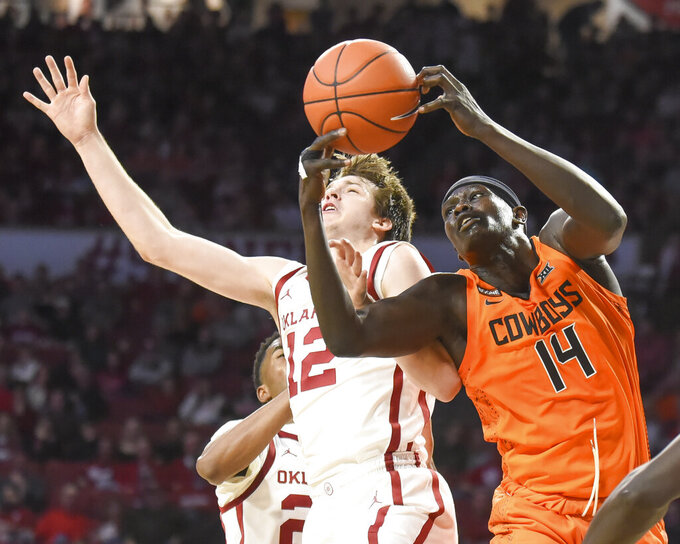 Oklahoma St forward Yor Anei (14) tries to get to the ball before Oklahoma guard Austin Reaves (12) during the first half of an NCAA college basketball game in Norman, Okla., Saturday, Feb. 1, 2020. (AP Photo/Kyle Phillips) 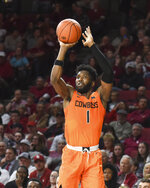 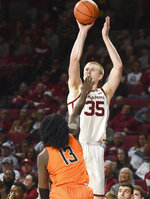 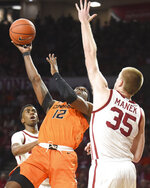 He scored 17 points in the first eight minutes and finished with 30 to help the Sooners beat Oklahoma State 82-69.

Oklahoma has three players who average at least 14 points per game — Manek, Kristian Doolittle and Austin Reaves. But the Sooners quickly realized Manek would be able to get open shots against Oklahoma State's zone defense.

“We attacked the defense well,” Manek said. “I happened to be the guy who was open and fortunately able to knock it down. Teammates were able to draw them in and kick out.”

Manek finished a point short of his career high and matched a career best with seven 3-pointers. His effort to take over the game caught Oklahoma State coach Mike Boynton's attention.

“That’s what we need,” Boynton said. “We need someone like him to grab the bull by the horns and say ‘I am going to be the guy that gets us going in the right direction.’ When you don’t have a confident group, no one will step up and take that risk. Obviously, Manek stepped up (for Oklahoma) and the other players just continued to feed off of him.”

Reaves had 21 points and six assists and Alondes Williams added 12 points for the Sooners (14-7, 4-4 Big 12), who bounced back from a loss at Kansas State on Wednesday. The Sooners shot 50% overall and 56.5% percent in the second half.

Oklahoma got it going early. During a three-possession stretch, Williams dunked, then Reaves dunked, then Williams jammed again to put the Sooners up 30-18.

Oklahoma hit a lull late in the first half, but Manek scored in close on a layup, then made a 3-pointer to get the Sooners rolling again. Oklahoma led 43-30 at halftime behind Manek's 22 points.

Oklahoma State's Yor Anei was called for a flagrant foul for an elbow to Manek's face with 9:16 remaining in the second half. Manek made the second of two free throws and Oklahoma got to keep the ball. Manek then drained a 3-pointer to put Oklahoma up 69-49.

“Communication on defense has been an issue, particularly in the moments of adversity,” Boynton said. “Guys tend to go into their shells. When the game is on the line, when people are in the building, we need to grab them by the collar and get us through the tough situations.”

Oklahoma State: It was another disappointing loss for the Cowboys, who fell below the .500 mark for the first time this season.

“I feel we competed well, but maybe not enough in moments,” Boynton said.

Oklahoma: Doolittle, the team's No. 2 scorer, deferred and became more of a passer. He was held to six points but had 10 rebounds and a career-high seven assists. The Sooners showed they could adjust on the fly.

“We knew they were going to play zone at some point," he said. "The middle was open. I just flashed to the opening, got the defense to collapse on me and kick the ball out.”

Doolittle surpassed 1,000 points in his career. He entered the game with 998 points. He is the 47th Sooner to reach the milestone.

"My dad was talking about it earlier in the week to me, so I knew where I stood going in," he said. "I made it, and Brady came over and slapped my hands and said ‘good job.’ It’s great to get 1,000 points in a win, but even better in Bedlam.”