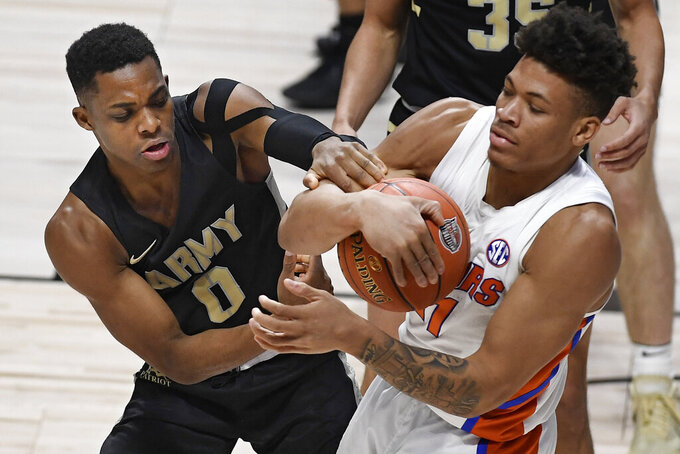 Army's Josh Caldwell, left, and Florida's Keyontae Johnson fight for possession of the ball in the second half of an NCAA college basketball game, Wednesday, Dec. 2, 2020, in Uncasville, Conn. (AP Photo/Jessica Hill)

UNCASVILLE, Conn. (AP) — Tre Mann scored a career-high 19 points, including five free throws in the final minute, and added six rebounds, four assists and five steals, to help Florida open its season with a 76-69 victory over Army on Wednesday.

Florida battled back and took a 67-66 lead with 3:14 remaining on Omar Payne's dunk. The Gators didn't make another field goal, but secured the win by making 11 of 12 free throws after struggling at the line for much of the game. They finished 24 of 36 from the line.

Mann, making his debut at point guard, secured his fifth steal in the closing seconds and made 1 of 2 free throws for a 74-69 lead. He grabbed a defensive rebound on Army's next possession before making two more at the stripe.

Keyontae Johnson, who averaged 14 points and 7.1 rebounds last season, added 16 points and Cleveland State transfer Tyree Appleby, who sat out last season, scored all 15 of his points in the second half for Florida.

Mann, a former McDonald’s All-American, started four games during his freshman year last season, and reached 13 points twice. He finished 6 of 13 from the field against Army.

Freshman guard Lonnie Grayson had 13 points and eight rebounds for the Black Knights. Jalen Rucker and Josh Caldwell each added 12.

Florida had three games canceled at the start of its season, including then-No. 4 Virginia. The Gators are scheduled to play on Thursday against Boston College.