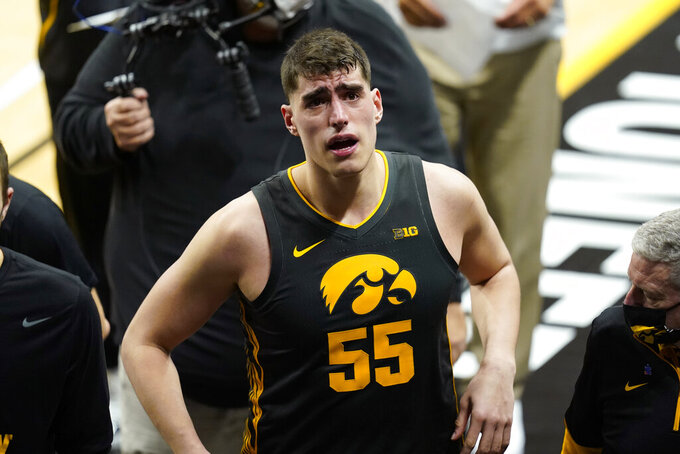 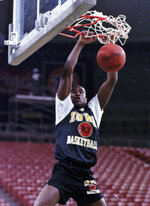 Iowa athletic director Gary Barta apologized to the family of Hawkeyes basketball great Roy Marble on Tuesday for any hard feelings they have over the retirement of star player Luka Garza's number.

Garza last month broke the 32-year-old career scoring record held by Marble, is the two-time Big Ten player of the year and is among the front-runners for national player of the year. Iowa announced after Sunday's home win against Wisconsin that no one in the basketball program would wear No. 55 after this season.

Marble led Iowa to its only 30-win season and an NCAA regional final in 1987 and to the Sweet 16 the next year, and many consider him the program's best player ever. His No. 23 has not been retired.

“We have learned since Sunday that Roy Marble’s family was hurt and feeling disrespected since that day,” Barta said. “I just want to take a moment and share that absolutely that disrespect was unintentional and to publicly apologize for that.”

The younger Marble also starred for the Hawks. He scored more than 1,600 points and was an all-Big Ten first-team pick in 2014. Father and son both had short NBA careers.

Barta said that since he arrived at Iowa in 2006, three players are most often brought up as deserving to have their numbers retired: Marble and consensus All-Americans Murray Wier (1948) and Chuck Darling (1952).

Barta said none of the three met the university's criteria for such an honor. Barta would not disclose the criteria.

“Iowa Athletics, in conjunction with the Iowa Varsity Club, have had different criteria over the years involving accomplishments, All-America recognition, individual awards, etc.,” the athletic department said in a statement. “Gary Barta and Iowa administration have been working towards a set of criteria that is more streamlined, in which exact awards and recognition are included. The top two priorities are individual National Player of the Year recognition, and consensus All-America recognition. Gary and Iowa administration will continue to work towards a more direct list of criteria that will be used moving forward.”

Marble, Wier and Darling will be among the players honored in a permanent display planned for the Carver Hawkeye Arena concourse, Barta said. A temporary display is in place until the school moves forward with a concourse renovation project.

Coach Fran McCaffery said he got involved in the discussions with the Marble family because he coached Roy Devyn Marble.

“I felt it was important to do that,” McCaffery said, “and our conversations have been very positive and they will remain so as we move forward to honor Roy the way that he should be.”