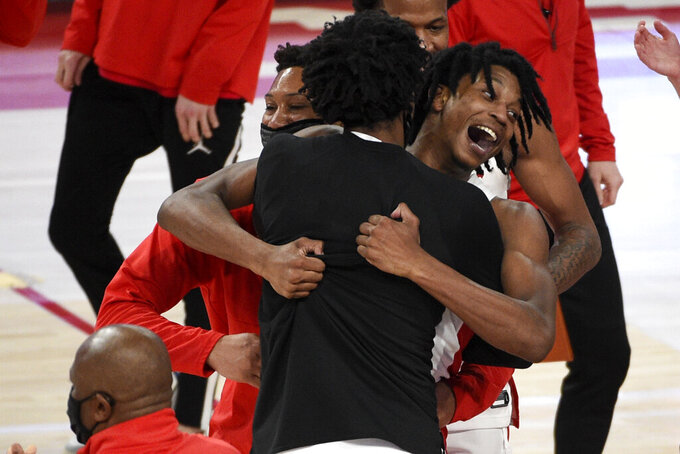 HOUSTON (AP) — Tramon Mark's teammates knew his buzzer-beater was good as soon as it left his hand.

The Houston freshman hit a long 3-pointer as time expired to give the No. 9 Cougars a 67-64 win over Memphis on Sunday.

After Memphis had tied it with 1.7 seconds left, Marcus Sasser threw the ball to midcourt where Mark picked it up. He dribbled through two Memphis defenders and launched a 35-footer off the backboard and in.

“I saw it the whole way in,” Houston guard DeJon Jarreau said. “I was standing right next to him. Just grabbed it, shot it with confidence. That’s what he does. He makes unorthodox shots like that. It was a one-legged leaning 3 from half-court, and he hit it.”

Following the shot, Mark ran to the opposite basket where his teammates chased after him and mobbed him in a hectic scene. Houston coach Kelvin Sampson and his coaching staff threw their hands in the air in celebration. The crowd of 1,859 — around 25% of capacity — went wild, becoming a loud scream.

Mark, who is a freshman, tweeted: “To do that on senior day for those guys, just makes it even better.”

Sampson said the play was drawn up for Mark.

“The last thing we told Tramon in the huddle was he would have time to catch it, dribble and get the shot off,” Sampson said. “The kid made a heck of a shot.”

Landers Nolley II scored 14 points, Lester Quinones and DeAndre Williams each added 11 points for Memphis (15-7, 11-4). The Tigers shot 47%, including 8 of 21 on 3-pointers. Memphis had its six-game winning streak snapped.

Memphis coach Penny Hardaway said the Tigers were going to foul on the last play since they had two to give, but he was concerned about possibly giving Houston the ball at halfcourt with 1.5 seconds remaining.

“When he turned to his strong hand, I didn’t like that at all because it was 1.7 seconds,” Hardaway said. “When he split Damion Baugh and Lester and he released the ball, from my angle, I saw it going in all the way.”

The loss stings more for the Tigers, who needed a big win to help their case for an NCAA Tournament berth. With Selection Sunday in a week, Memphis will likely need to win the American Athletic Conference Tournament championship or at least get to the title game to have a chance. That would mean likely getting through Houston again.

Quinones missed a 3-pointer, but Houston couldn’t grab the rebound, and it bounced out to Boogie Ellis, who hit a 3-pointer with 1.7 seconds left to tie it at 64.

Houston had a chance to put the game away, but Sasser missed a 3-pointer with 23 seconds remaining, Jarreau grabbed the rebound but it was stolen by Williams.

Williams cut the lead to 64-61 on a layup with three minutes remaining but missed the free throw. After both teams traded missed baskets and turnovers over the next two minutes, Quinones missed the front end of a one-and-one with 49 seconds left and Gorham grabbed the rebound.

Memphis: The Tigers missed a chance to improve their NCAA Tournament chances with a marquee win. … Memphis shot 10 of 20 from the free-throw line. The Tigers got 16 points from their bench and had 14 assists.

“We’re very talented, but we take way too many plays off,” Hardaway said. “We came into the game understanding what we had to do to them, and that was to keep them off the glass, and we didn’t do a good job.”

Houston: The Cougars earned a solid win to help their quest for a higher seed in the NCAA Tournament. ... Houston, which won its 25th straight home win, outrebounded Memphis 40-32. Houston held a 15-6 advantage in offensive rebounds.

Memphis: The Tigers will be the No. 3 seed in the American Athletic Tournament and will play Friday in the quarterfinals.

Houston: The Cougars will be the No. 2 seed in the AAC Tournament and will play Friday in the quarterfinals.