The marquee NCAA Tournament matchups that could have been 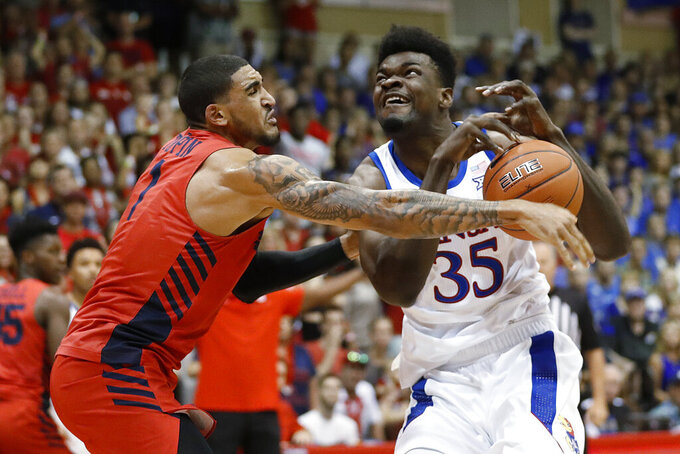 FILE - In this Nov. 27, 2019, file photo, Dayton forward Obi Toppin (1) knocks the ball away from Kansas center Udoka Azubuike (35) during the first half of an NCAA college basketball game in Lahaina, Hawaii. Kansas and Dayton were headed toward earning No. 1 seeds in the NCAA tournament, so any meeting would have to be in the Final Four or national championship game. What a rematch it would be. The Jayhawks and Flyers played a high-level game at the Maui Invitational, won 90-84 in overtime by Kansas. (AP Photo/Marco Garcia, File)

Seton Hall's Myles Powell and Marquette's Markus Howard went head to head during the regular season in a pair of games befitting two of college basketball's most dynamic players.

The potential for a third meeting washed away with the cancellation of the Big East tournament, then NCAA Tournament.

Fear of the coronavirus has taken grip on the nation. The NCAA Tournament, which was slated to start in full on Thursday, has been turned into March Sadness. All those matchups college basketball fans look forward to every year have been replaced by empty arenas and locked doors.

“Here it is the middle of March and we should be playing games," Howard said. “It's pretty crazy.”

Powell and Howard met for the first time this season on Jan. 11 in Newark, New Jersey. Howard outscored Powell 27-23, but Seton Hall used its depth to roll to a 69-55 win.

They squared off again on Feb. 29 in Milwaukee and had a similar result; Howard scored 37 points, Powell had 28 and the Pirates won 88-79.

No. 16 Seton Hall and Marquette were slated to meet in the Big East tournament quarterfinals before it was canceled. A fourth meeting in the NCAA Tournament would have been contingent upon the Golden Eagles getting an invite — they were in pretty good shape — and the NCAA Selection committee putting the two Big East teams in the same side of the bracket.

The selection committee has a knack for intriguing early-round matchups — Howard against Murray State's Ja Morant last year was one — so it wouldn't have been a surprise to see two of the nation's top-scoring guards on a collision course.

Now, both are sitting at home, waiting for the dust to settle.

Here's a few more NCAA Tournament matchups we would have liked to see:

Many fans were hoping the committee would do something similar this year by putting Arizona State and Duke, Hurley's alma mater, on course to meet each other early in the NCAA Tournament.

Hurley won two national championships under Blue Devils coach Mike Krzyzewski and has been speculated to be the perfect candidate in Durham when Coach K retires.

Watching those two butt heads and turn shades of red would have been fun.

DAYTON VS. KANSAS: Kansas and Dayton were headed toward earning No. 1 seeds in the NCAA Tournament, so any meeting would have had to be in the Final Four or national championship game.

What a rematch it would be.

The Jayhawks and Flyers played a high-level game at the Maui Invitational, won 90-84 in overtime by Kansas.

Dayton proved it was a legitimate mid-major monster in Maui and kept producing, matching its highest ranking at No. 3 in the final AP Top 25.

Kansas was the favorite to win the national title, spending the final three weeks of the season at No. 1.

Watching Devon Dotson and Udoka Azubuike square off against Obi Toppin and Jalen Crutcher again would have been must-watch, particularly with a national title on the line.

3-POINT SHOOTOUT: Teams have relied more on the 3-point shot in recent years. The NCAA Tournament could have had two of the best go at it: Creighton and Brigham Young.

The Cougars led the nation in 3-point shooting at 42.2% and made 10.4 per game, third nationally. The Bluejays were only a few ticks behind, making 9.7 per game while shooting 38.6%.

The game could have had a combined 60 attempts from the arc.

WINSTON VS. PRITCHARD: Michigan State's Cassius Winston and Oregon's Payton Pritchard have been two of the nation's steadiest point guards the past four years.

Winston played with a heavy heart all season after the death of his brother, yet still led the Spartans with 18.6 points and 5.8 assists.

Pritchard became the fourth player in the Pac-12 to lead the conference in scoring (20.5) and (5.5) assists, putting him among the frontrunners for national player of the year.

Both are seniors, so it would have been nice to see them square off late in the tournament, maybe even the title game.

RUTGERS VS. HOFSTRA: Hofstra had not been to the NCAA Tournament since 2001. Rutgers had a longer drought, back to 1991.

Two feel-good stories could have keep going in what would have likely been a second-round-or-later matchup.

GARZA VS. NWORA: No. 14 Louisville against Iowa would have been a great game. Watching Jordan Nwora and Luka Garza trade baskets could have been epic.

The 6-foot-11 Garza is one of the frontrunners to win national player of the year after averaging 23.9 points and 9.8 rebounds while shooting 54% from the field.

The 6-7 Nwora led the Cardinals with 18.0 points per game while grabbing 7.7 rebounds.

Steven Enoch would have likely been matched up against Garza defensively, but there could have been a whole lot of fireworks between the two star players.