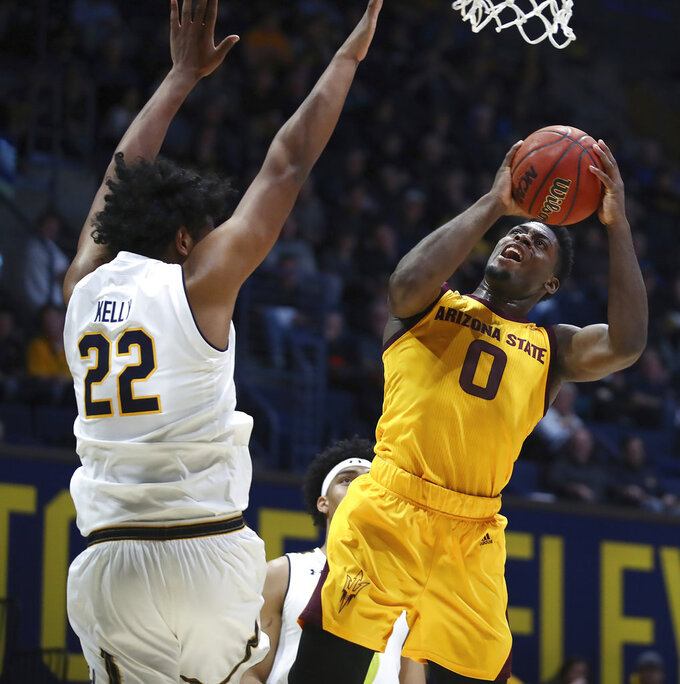 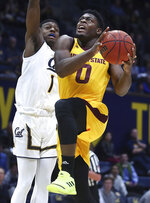 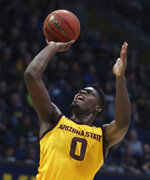 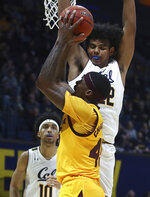 BERKELEY, Calif. (AP) — Remy Martin is getting increasingly comfortable coming off the bench, even as Arizona State coach Bobby Hurley is making plans to change that.

For the second straight game the Sun Devils point guard was not in the starting lineup, though it hardly mattered.

Martin scored a career-high 24 points, including five 3-pointers, to go with eight assists, Zylan Cheatham had 17 points and six rebounds, and Arizona State overcame a sloppy first half and beat California 80-66 on Wednesday night.

"Remy was outstanding," Hurley said. "He was getting guys involved and he threaded the needle a few times. He was one of the only guys really that had a flow and was making shots."

Martin started nine of the first 11 games this season but came off the bench last week against Colorado and was held scoreless while taking only two shots.

It was completely different against Cal.

Martin scored 12 points in the first half then made a series of big plays to get the Sun Devils rolling in the second half.

"In the first half we let our offense translate to our defense, and that's what we corrected," Martin said. "We played defense, we got in transition, we hit shots and we started getting on a roll."

It's the second straight win for Hurley's squad following back-to-back losses to Princeton and Utah.

"The lineup's fluid and it's always going to be because we have a collection of guys that I'm really comfortable starting," Hurley said. "Remy's most likely going to be in the starting lineup on Saturday because I'm not a fool."

Arizona State trailed by 14 late in the first half but closed on an 11-2 run then opened the second half with another big run to take the lead for good.

Martin led the surge with a trio of 3s in a two-minute span, the last of which put the Sun Devils up 60-46.

"When Remy Martin started hitting shots you can't keep the zone as tight," Bears coach Wyking Jones said. "He went into the game shooting 19 percent (on 3's) and he goes 5 for 7. You play the statistics and you say, 'OK, let that guy shoot.' And he made us pay."

After Hurley called a timeout three minutes later and angrily yelled at a pair of his players, the Sun Devils responded with 12 consecutive points and closed within 35-33 at halftime.

Arizona State: The Sun Devils have yet to hit the stride many expected them to be in once conference play started and they got away with a less-than-impressive effort against the Bears. They'll have to get significantly better if they are to get to the top of the Pac-12 standings and back into the AP Top 25. Martin's perimeter shooting in the second half helped get the game back in the Sun Devils favor. Cheatham also came up big but may miss Saturday's game against Stanford for personal reasons.

California: The Bears played about as good a first half as they could play but they couldn't keep it going in the second half and wound up on the wrong end of another lopsided loss. Jones' team is winless in conference after winning only twice in the Pac-12 a year ago.

Cal had only eight assists in its second game without point guard Paris Austin, who injured an ankle in practice Friday. "They fed off of us not being able to score," Jones said. "We just don't have the same flow offensively as when we have Paris."

Edwards is one point shy of 1,000 for his career. Edwards is in his first season at Arizona State after playing at Cleveland State from 2015-17.