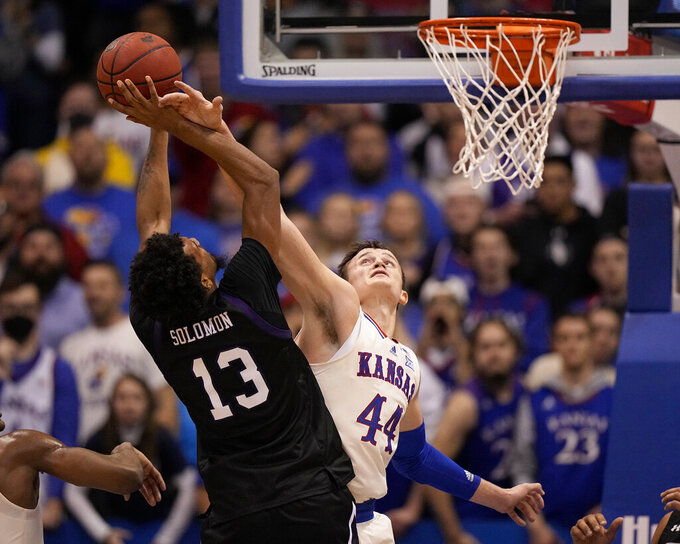 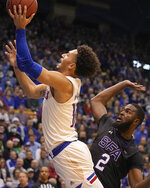 LAWRENCE, Kan. (AP) — Remy Martin hit a 3-pointer with one minute to go to extend a three-point lead and help No. 7 Kansas over Stephen F. Austin 80-72 on Saturday night.

The Jayhawks (9-1) led 73-70 before Martin buried the 3 from the top of the key. Christian Braun scored a game-high 21 points, Ochai Agbaji had 18, Martin contributed 15 and Jalen Wilson scored 10.

“I saw the shot clock and it was about five seconds and I just wanted to make a play," Martin said. "I did not play well, but in big=time moments, I wanted to make the best play possible.”

The Lumberjacks (8-4) were led by David Kachelries with 18 points, Gavin Kensmil with 16, Sadaidriene Hall with 14 and Calvin Solomon with 10.

The Jayhawks held the lead most of the game, with Stephen F. Austin falling behind by 12 early in the first half. But the Lumberjacks fought back and had the lead five minutes into the second half — despite committing 20 turnovers that led to 28 points for Kansas.

David McCormack picked up two fouls early in the game and never got quite into the game, scoring just two points and playing under 10 minutes. Mitch Lightfoot had six points, six rebounds and played the most minutes he’s had so far this season.

The Lumberjacks outscored Kansas 48-34 in the paint and outrebounded the Jayhawks 31-28.

“That’s not good to give up that many points in the paint," Lightfoot said. "We’ve got to play and defend the ball better.”

The Jayhawks had numerous chances to extend the lead to double digits and put the Lumberjacks away, but never did.

“Our kids responded very well, but I'm disappointed because it's a one possession game and we couldn't get a rebound,” Stephen F. Austin coach Kyle Keller said. "Give Kansas all the credit and why they are one of the best teams in college basketball."

The Lumberjacks shot 51% overall from the field and 61% in the second half.

“It’s pitiful and I didn’t think we guarded well at all," Kansas coach Bill Self said. "I didn’t think our defense was very good.”

Stephen F. Austin: This is its only game against a Power Five conference team all season, and kept pace.

Kansas: The Jayhawks committed 14 turnovers and struggled scoring inside the paint, looking like a different team than the one that beat Missouri last weekend by 37.