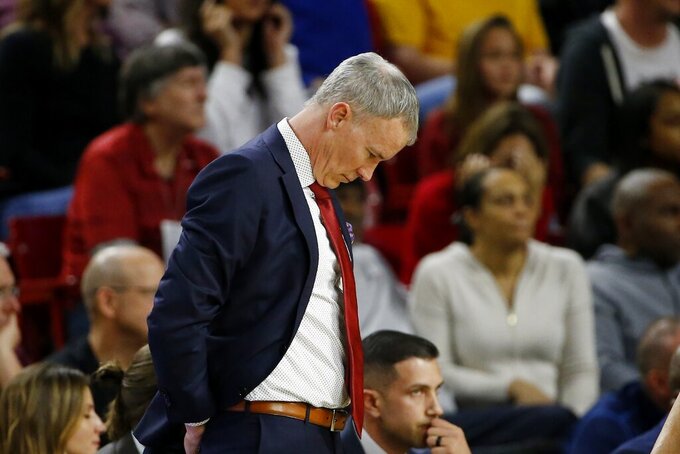 Shooting 31% from the field, and going more than 11 minutes without a made basket don't normally lead to a win. But all the Arizona State Sun Devils needed was a friendly bounce, spin and roll.

Remy Martin dribbled to his right, pulled up and got the shooter's roll on the rim on a jumper with 19 seconds left, and Arizona State held on for a 66-64 win over Southern California on Saturday night.

Martin's 22 points, 16 of those in the second half, led Arizona State (15-8 overall, 6-4 in Pac-12), which has won three straight and five of six. Alonzo Verge Jr. added 16 points as the Sun Devils rallied from a 13-point first-half deficit.

“I didn't feel comfortable playing how I was playing, but I knew that shot was going to be open,” Martin said. “And that's a shot that, since I've been here, that mid-range shot has been something I've been working on consistently. I got the roll and as it was rolling, I was like ‘Please! All the hard work that I've put in... Just drop in.'"

Jonah Mathews’ 22 points led USC and Daniel Utomi added 15 for USC (17-7, 6-5), which has lost three in a row. The Trojans committed 24 turnovers, 16 in the second half, and fell into a tie for fifth in the conference.

“This league is very tough, especially on the road,” USC coach Andy Enfield said. “We've won a few close games this year and we've lost a couple of close ones.”

The Trojans went cold for a long stretch in the second half, but came back to take the lead again late in the game. Arizona State went ahead 56-52 when Martin made a layup and then threw down a dunk with 11:28 to play.

It was the last basket for the Sun Devils until Martin's heroics. Meanwhile, USC took a 64-59 lead, then Martin made three free throws to tie it with 2:15 left.

“We know we're supposed to have been doing this," Verge said of the team's current run of wins. “It's just finally starting to string together now.”

Mathews led the Trojans with 17 first-half points, although he went to the locker room briefly after he appeared to injure his right arm when he fell after a blocked layup attempt.

Nick Rakocevic scored all eight of his points in the first half, and USC took its largest lead of the half on a Utomi layup and free throw for a 33-20 advantage with 5:34 until halftime.

Arizona State closed the half down 40-32, with Verge scoring 13 points in the first 20 minutes. But the Sun Devils shot just 35%.

Martin’s steal and two-handed dunk made it 56-52 and got the crowd on its feet with thunderous applause, and USC went more than 3 1/2 minutes without a point in the second half.

USC: The Trojans have a good opportunity to turn things around with home games against two of the Pac-12’s lower-echelon teams next week, Washington and Washington State. A 72-40 drubbing at the hands of the Huskies in in Seattle last month should be at the forefront of their thoughts this coming week.

Arizona State: The Sun Devils head to the Bay Area next week with plenty of confidence as they surged into the top four of the Pac-12. But at only 15 total wins, a great regular season finish over the final eight games — and probably a win or two in the conference tournament — will be necessary to be considered for an at-large bid to the NCAA tournament.

Arizona State's Jalen Graham rejected a Mathews layup in the first half, then hustled down to the other end for a two-handed reverse dunk.

The Sun Devils' Taeshon Cherry was injured while defending on USC's final possession of the game, and had to be helped to mid-court at game's end to ring the team's traditional victory bell. Coach Bobby Hurley said Cherry landed awkwardly on one leg and will be evaluated in the coming days.