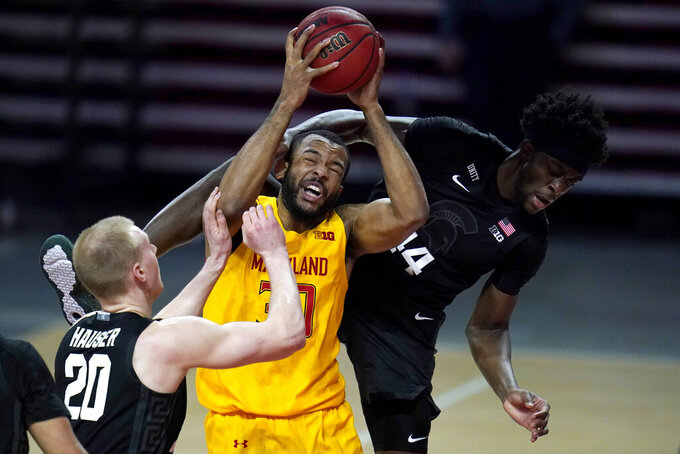 COLLEGE PARK, Md. (AP) — Eric Ayala scored 22 points and Maryland led throughout in picking up an important 73-55 win over Michigan State on Sunday.

The game matched a pair of hot bubble teams with Michigan State (13-10, 7-10) coming in on a three-game win steak, including victories over No. 5 Illinois and No. 4 Ohio State, and Maryland (15-10, 9-9) arriving with four consecutive conference wins.

Maryland scored the first 11 points in a run that included a trio of 3-pointers, led by 10 at halftime and fended off a brief Spartans charge midway through the second half. Maryland has now kept eight of its last 10 opponents under 61 points. The Terrapins held the Spartans to 33% shooting, including 8 of 28 from the arc, and allowed only four fast-break points to an offense that had been averaging over 71 points per game.

A 6-0 spurt got the Spartans within five points but they were then outscored 24-11 the rest of the way, punctuated by a 180 dunk by Aaron Wiggins with a minute to go.

Wiggins finished with 13 points, Darryl Morsell 11 and Hakim Hart 10 for Maryland, which made 23 of 24 free throws.

Maryland has put itself in good position for NCAA Tournament consideration with games at Northwestern (Wednesday) and home against Penn State (next Sunday), 13th and 12th in the Big Ten, remaining to end the regular season.

Michigan State has a much tougher road to keep its streak of 22 straight NCAA Tournament appearances alive, taking on Indiana at home Tuesday before facing conference leader and No. 3-ranked Michigan twice, on the road on Thursday and at home next Sunday, to end the regular season. The Big Ten Tournament follows March 10-14.