Maryland seeks another banner after tying for Big Ten title 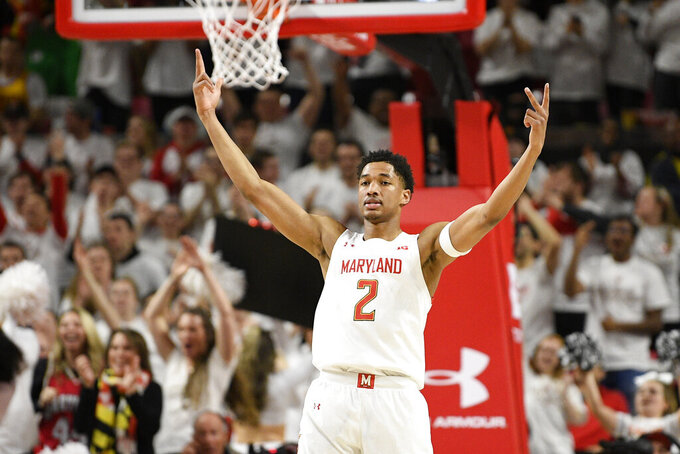 Maryland guard Aaron Wiggins (2) reacts after he made a three-point basket during the second half of an NCAA college basketball game against Michigan, Sunday, March 8, 2020, in College Park, Md. (AP Photo/Nick Wass)

COLLEGE PARK, Md. (AP) — Earning a share of the Big Ten regular season title provided Maryland with a sense of accomplishment and no small measure of relief, given the pressure that comes with fulfilling the expectations of a top 10 team.

The Terrapins concluded a rigorous regular season Sunday by defeating Michigan 83-70 to earn a piece of their first Big Ten crown since joining the league in 2014. After the final horn, Turgeon and his players posed with the sparkling trophy and cut down the nets on both ends of the court.

“It means a lot," sophomore forward Jalen Smith said. “We scratched our name into history. Every time somebody walks into the Xfinity Center and they see a Big Ten banner up there, they're going to know it was us."

The hope for No. 12 Maryland is that it was the first of several celebrations this season. After finishing tied with Wisconsin and Michigan State atop the standings, the Terps open play in the Big Ten Tournament on Friday as the No. 3 seed.

“As soon as we come back on Tuesday, everybody's going to be locked in to what we can do," guard Aaron Wiggins said. “Knowing that we were able to get this done, we'll know that we have the potential, we have the players and we have the talent to do more than just the regular season Big Ten championship."

Wiggins is part of a solid supporting cast to Maryland's top two stars, senior guard Anthony Cowan Jr. and Smith, who's had 21 double-doubles this season. Cowan returned for a final year to help lift the Terrapins to new heights, and he's eager to add another banner to the rafters next to the one proclaiming Maryland (24-7, 14-6) to be Big Ten regular seasons champs in 2019-20.

“This definitely give us momentum," Cowan said. “But we all know there's more work to do."

Maryland held a two-game lead with five to play before losing three of four to fritter away the advantage. Though the Terps had to settle for a tie at the top, Turgeon was satisfied with the fashion in which his team finished.

“You don't hang a league championship very often, so there was a lot (of pressure) on our guys. There is obviously a big weight off of us," Turgeon said. “And now, hopefully, we are relaxing. But we played the way we are capable of playing and we looked like Maryland, the team that was 23-5 and ranked ninth in the country."

It's been quite a run for the Terrapins, who were 3-3 in the league before rattling off nine straight wins to take control. Despite fading a bit down the stretch — including losses to Michigan State and Rutgers before the Michigan game — Maryland can look back on the regular season with pride.

“Coach Turgeon told us that we were going to have a target on our back," Smith said. “We handled it the way we should have. Just knowing that we lost those two last games brought down a little bit of confidence in us, but we stuck together and made sure that we locked it down for the seniors."

And now, it's on to the Big Ten Tournament and then to the NCAAs, where Maryland will strive for the school's second national title. After limiting the Wolverines to four baskets over the final 11 minutes, Turgeon is counting on defense to carry the Terps deep into March and beyond.

“In the last eight minutes we were phenomenal," Turgeon said. “That gives me hope moving forward.”