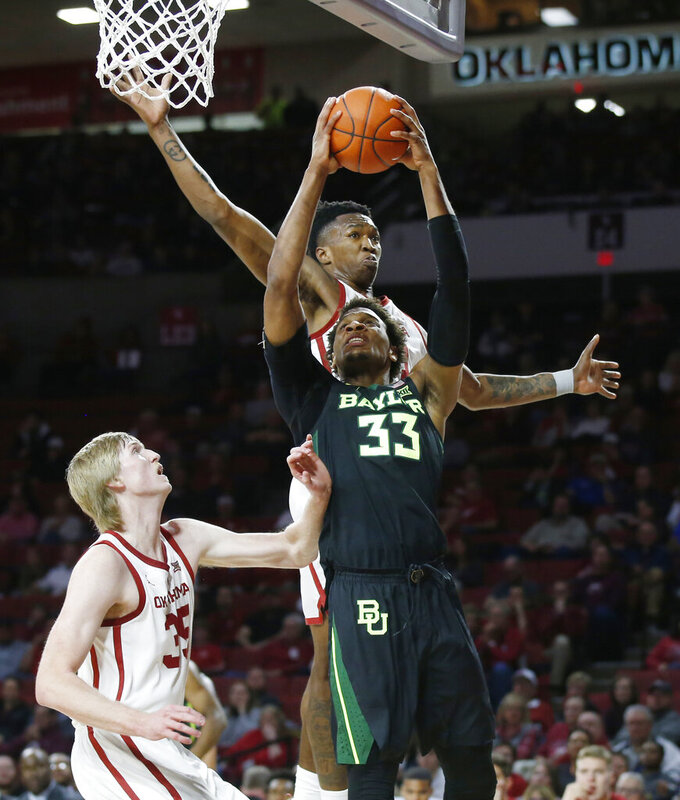 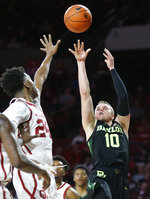 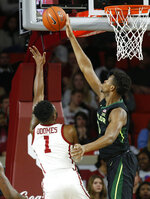 NORMAN, Okla. (AP) — Baylor coach Scott Drew thinks it was just one of those nights for Oklahoma and coach Lon Kruger.

Makai Mason scored 12 points, and Baylor rolled past the Sooners 77-47 on Monday night for its fifth straight win.

"Some days, you just have those days where you play well, and we really played well," Drew said. "Obviously, OU, it wasn't their best game. I have so much respect for coach Kruger and the job he does, so anytime you're able to get a win like that — it doesn't happen often."

Mario Kegler scored 11 points and Jared Butler added 10 for the Bears (14-7, 5-2 Big 12), who claimed their third league road win of the month and moved into a tie for first place in the conference with Kansas and Kansas State.

The Bears already had beaten Oklahoma State and West Virginia away from home in Big 12 play. Mason said Baylor's team-first approach helps on the road.

"We play for each other," he said. "One guy's not going to get it done every night. We've got to have multiple guys doing multiple things. So sharing the ball is a huge thing for us, and then I think our defense and rebounding is going to keep us in every game as well."

Kristian Doolittle scored 12 points and Miles Reynolds added 11 for Oklahoma (15-6, 3-5), which was sitting just outside of the newly released Top 25. The Sooners got blown out two days after beating Vanderbilt by 31 points in the SEC/Big 12 Challenge.

"They were sharp," Kruger said. "On both ends of the floor, we didn't do what we had to do to fight that off. We've got to do a lot better. Baylor was playing great. They had a good attitude and good enthusiasm, and we were way too tentative to match their physicality."

Baylor dominated every phase to take a 39-21 halftime lead. The Bears' defense packed the paint and made the Sooners take uncomfortable shots. It was a season low for points in a half for the Sooners.

Oklahoma's offense improved in the second half, but the Sooners just traded baskets with the Bears and couldn't make up ground. Baylor hit some 3s late to push out the final margin.

"At the end of the day, you put them in position where if they make a shot, it's good offense, if they miss it, it's bad offense, and I just thought it wasn't their day from the field," Drew said.

Baylor: The Bears became a legitimate threat to win the conference title. They shot 54 percent against the conference's No. 2 field-goal percentage defense.

Oklahoma: Trae Young has gone on to the NBA, and the Sooners really missed him in this particular case. Young scored 44 points in a 98-96 win against Baylor in Norman last season. The entire team barely reached that total this time around. The Sooners have sometimes struggled to manufacture points, and this time, the defense didn't bail them out.

Oklahoma's top scorer for the season, Christian James, was held to eight points on 2-for-9 shooting. He entered the night averaging 16.8 points per game.