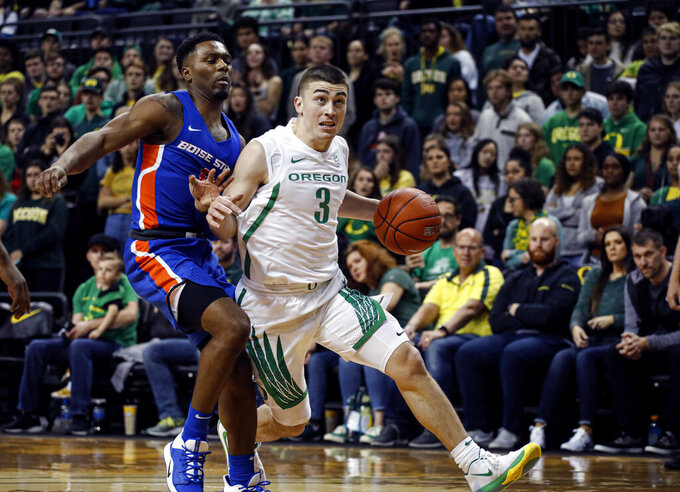 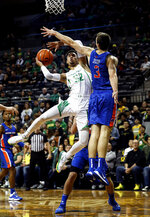 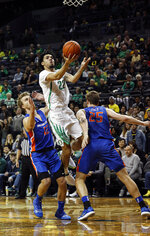 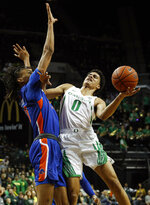 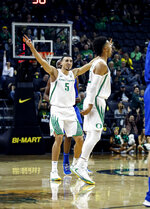 EUGENE, Ore. (AP) — Anthony Mathis was on target against Boise State, and so were most of his Oregon teammates.

Mathis, in his second game with the Ducks after transferring from New Mexico for his final season, hit on 10 of 12 shots from the field overall, including 9 of 11 from 3-point range. The Ducks (2-0) shot 42 for 60 (70 from the field overall, and made 13 of 19 3-point attempts, after 1-for-13 shooting from beyond the arc in their opener.

"I made the first one and it's like a breath of fresh air," Mathis said. "I just went from there."

Payton Pritchard, a teammate of Mathis' at Oregon's West Linn High School, had 19 points, seven assists and six rebounds. Addison Patterson, a freshman, had 17 points before fouling out, and Shakur Juiston, a graduate transfer from UNLV, chipped in 14 points and nine assists.

"Oregon was locked in," Broncos coach Leon Rice said. "When they're making shots like that, you have to give them some resistance.

"If you can't make a difference defensively, you're in trouble."

A large difference in shooting percentage helped the Ducks build a 48-30 halftime advantage. While Oregon shot 63% in the opening 20 minutes, including 7 of 11 from long range, the Broncos shot 35% and made only one of their 12 3-point tries.

Oregon coach Dana Altman said shooting that well "kind of distorts things right from the start. I thought our ball movement for the most part was really good."

The Ducks finished with 27 assists, more than in any game last season.

Oregon pushed its lead out to double digits at 22-11 when BSU went four minutes without a point and more than five minutes between field goals. The Broncos briefly closed within 22-17 before Oregon hit 3-pointers on three consecutive possessions to push the lead to 31-17.

Oregon led by as many as 36 points in the second half, easing to the victory to set up an anticipated matchup with No. 14 Memphis on Tuesday in Portland.

"Their athleticism and length stick out," Altman said of the Tigers. "We'll find out where we're at.

"We know they're a very talented team, it'll be a tough game to get ready for in two days."

Oregon: With its rebuilt roster of three freshmen and three transfers, the Ducks needed some confidence and a second decisive win at home to start the schedule. Oregon is 78-4 in nonconference games at Matthew Knight Arena, and one of the defeats came against Boise State two years ago.

Fresno State: It was a familiar result for the Broncos, who are 3-27 against ranked opponents in Leon Rice's 10th season as head coach and 8-52 all-time against Top 25 foes.

Oregon sophomore Francis Okoro, an expected starter, missed the game after being struck by an automobile earlier in the week. The 6-foot-9 Okoro recorded a double-double in Oregon's opener with 10 points and 10 rebounds.

With his seven assists in the game, senior Payton Pritchard raised his career total to 501, putting him third in that category for his career at Oregon. Pritchard also became only the second Oregon player, joining the legendary Ron Lee, with more than 1,000 points, 500 assists and 400 rebounds.

Abu Kigab, who transferred from Oregon to Boise State midway through last season, was not eligible to play against the Ducks as he waits to becoming eligible at the end of fall semester.

Oregon will play one of the featured games on its non-conference schedule when it hosts No. 14 Memphis on Tuesday in Portland.

Boise State plays host to UC Irvine on Friday night, the second of only six home games during its nonconference schedule.