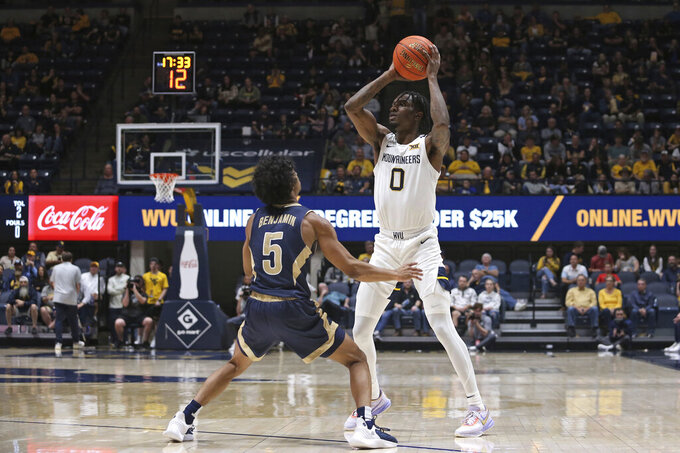 MORGANTOWN, W.Va. (AP) — Emmitt Matthews scored 15 points in his return to West Virginia, Tre Mitchell added 13 points in his first game in nine months and the Mountaineers opened the season with a 76-58 victory over Mount St. Mary’s on Monday night.

Erik Stevenson, a South Carolina transfer, overcame early foul trouble that forced him to miss most of the first half and finished with 10 points for West Virginia.

Matthews spent his first three seasons at West Virginia before transferring to Washington a year ago to be closer to family. A native of Tacoma, Washington, Matthew returned this season to Morgantown, where he’s been reunited with childhood friend Stevenson, who is from Lacey, Washington.

A crowd favorite, Matthews was making his 99th career start. He dunked on consecutive possessions midway through in the second half to put the Mountaineers ahead 44-29.

Mount St. Mary’s got no closer than 11 points the rest of the game.

Mitchell had 10 of his points in the second half. He is a Pittsburgh native who started 17 games at Texas last season but had not played since early February, when he took what the Longhorns called a personal leave of absence.

West Virginia had a 45-28 rebounding advantage but committed 18 turnovers, one more than Mount St. Mary's.

Both teams struggled to score early. West Virginia’s lead was only 13-12 before scoring the next 15 points, including seven by Seth Wilson. Mount St. Mary’s ended its 10 minute field-goal drought with 1:34 left before the break and trailed 30-18 after shooting just 21.4%.

Mount St. Mary's: Jalen Benjamin scored 15 of his 18 points in the second half. Dakota Leffew added 12 points. Mount St. Mary's was outscored in the paint 32-10 and got just 10 points from its bench.

West Virginia: Newly minted Hall of Fame coach Bob Huggins is overseeing a roster makeover after losing 10 players, mostly to the transfer portal, including the top four scorers. Eleven players saw at least 10 minutes of action and 10 of them scored.