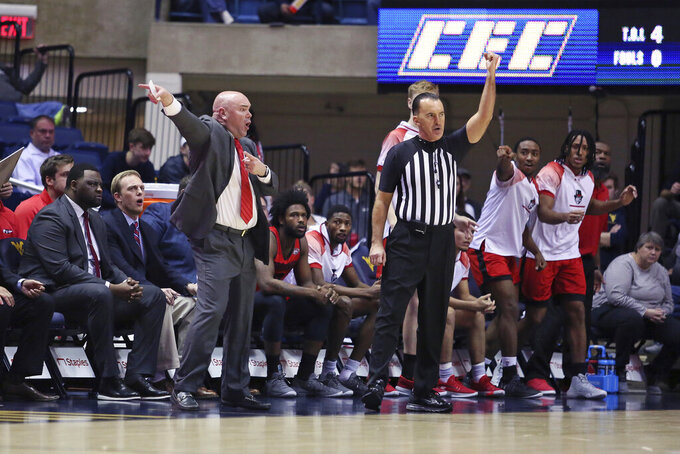 MORGANTOWN, W.Va. (AP) — Emmitt Matthews Jr. isn't the biggest player on the court and West Virginia coach Bob Huggins will be the first to point that out. But the 6-foot-7 sophomore knows how to find the basket.

"Guys like him are much better with movement," Huggins said, "He can use his length and athleticism."

Matthews scored 16 points and added 10 rebounds to lead West Virginia to an 84-53 victory over Austin Peay on Thursday night. It was Matthews' fourth game scoring in double figures this season and the first double-double of his career.

Matthews is third on the team with a 10.7-scoring average, a five-point improvement from last season. His 14 3-pointers made has matched his total for all last season.

"I'm gifted and I'm blessed to be here." Matthews said.

Oscar Tshiebwe added 14 points and 10 rebounds for the Mountaineers (8-1), who bounced back from their first loss of the season on Saturday to St. John’s.

Ten different players scored at least four points for West Virginia. The Mountaineers shot 51 percent (34 of 67) from the floor in their first home game in 11 days.

"We weren't trying to slow down the pace just because we were up however many points," Matthews said, "We wanted to keep running up the score."

Tshiebwe had 12 points after halftime.

"He runs better than any guy his size probably in the country," Huggins said, "So why wouldn't you take advantage of that?"

Terry Taylor, the preseason Ohio Valley Conference player of the year, scored 19 points before fouling out for Austin Peay (4-5). Antwuan Butler added 14 points. Jordyn Adams was held to four points, 10 below his average.

"It's extremely tough because my second-leading scorer turned the ball over six times," Austin Peay coach Matt Figger said, "He gave us absolutely nothing."

West Virginia went on separate runs of 9-0 and 13-2 in the first half to take a 38-21 halftime lead. Jordan McCabe and Matthews hit 3-pointers in the first minute after the break and the Mountaineers extended their lead to as many as 35 points.

"They're (West Virginia) just going to punch you in the mouth and they knocked all of our teeth out tonight," Figger said.

West Virginia: The Mountaineers held an opponent below 39% shooting from the field for the sixth straight game. West Virginia leads the Big 12 in defensive field goal percentage at 36.4%.

Matthews is the fourth West Virginia player this season to record a double-double. The others are Tshiebwe, Derek Culver and Jermaine Haley.

Austin Peay's Eli Abaev took a first-half elbow from Derek Culver and went to the bench with an ice pack on his nose. He did not return. Abaev was called for a foul on the play.

"I lose a starter in the first half right there when we were being pretty competitive," Figger said, "On a call that is a terrible, terrible call. He took an elbow right in the face and now he's got a concussion and a broke nose."