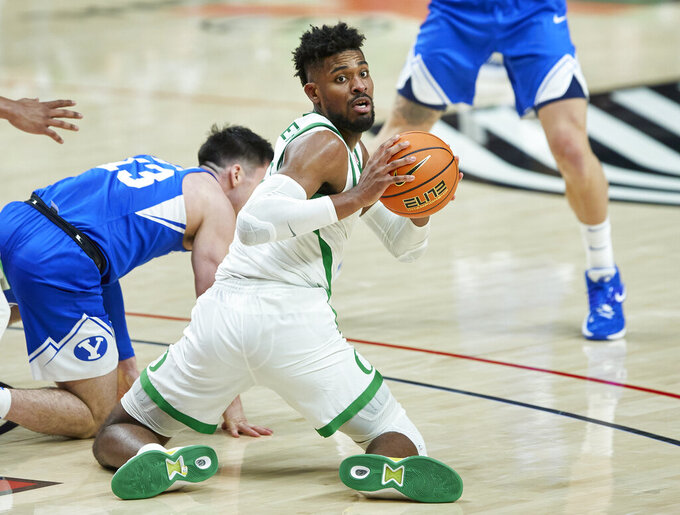 Oregon forward Quincy Guerrier, right, looks to pass the ball from next to BYU's Alex Barcello during the second half of an NCAA college basketball game in Portland, Ore., Tuesday, Nov. 16, 2021. (AP Photo/Craig Mitchelldyer)

LAS VEGAS (AP) — The Maui Invitational was all set to say aloha to the mainland and return to the Hawaiian Islands. Hawaii Gov. David Ige had signed off, the mayor of Lahaina was onboard and tournament officials were all set.

Two weeks later, the plan was scrapped. Coronavirus cases started to spike again and it really didn't make much sense to have eight teams head to Maui to play basketball games.

So, a year after being played in Asheville, North Carolina, the Maui Invitational will continue its mainland tour under the glittering lights of The Strip in Las Vegas.

“The goal always is to be in Maui because that's where it was born and that's where it has developed,” tournament chairman Dave Odum said. “Given that we were not able to do that for the second year in a row due to the COVID situation, we are more delighted to be situated in Las Vegas.”

Tournament officials worked into early September trying to lock down this year's tournament, setting an Oct. 1 deadline. Once it was clear Maui was not an option, they scouted several places to hold the tournament before working out a plan to play at Mandalay Bay's Michelob Ultra Arena.

It's not quaint Lahaina Civic Center and certainly not along the beach, but Las Vegas is a nice temporary locale until the tournament returns to the islands, hopefully next year. The eight-team event runs Monday through Wednesday.

“We're not going to have palm trees growing out of the arena or things like that, but we do have a real island feel,” Odum said. “Las Vegas is known as a ninth island anyway, so we feel very good where we are with the tournament.”

THE FIELD: The Maui Invitational typically has a strong field and this year is no different.

The bracket includes No. 12 Oregon, No. 15 Houston, Notre Dame, Wisconsin, Texas A&M, Butler and St. Mary's. Tournament host Chaminade, which is in the main bracket every other year, made a much longer trip this time, heading to Vegas instead of the short flight from Honolulu to Maui.

DOWN DUCKS: Oregon opened the season at No. 13 in The Associated Press preseason poll and was expected to contend for a third straight Pac-12 regular-season title. The Ducks got the season off to a solid start, rolling through lopsided wins over Texas Southern and SMU to move up a spot in the AP Top 25.

The good vibes came to a screeching halt last Tuesday, when Oregon struggled defensively and was even worse offensively in an ugly 81-49 loss to BYU. It was the first unranked team to have a 30-point road win over a top-15 team since 1993, and one of Oregon's worst losses under coach Dana Altman.

“We've got good players. I think they are good guys. I have not done my job, obviously,” Altman said. “Getting beat by 30 points, that hadn’t happened to us, I don’t know, and it shouldn’t happen to our program. I am totally embarrassed.”

The Ducks will likely take a big fall in Monday's poll, but they're still loaded with talent, so the loss could be a wake-up call heading into the Maui Invitational.

COMFORTABLE COUGARS: Houston took a big step in its seventh season under Kelvin Sampson last season, reaching the Final Four for the first time since the Phi Slama Jama teams of the early 1980s.

The Cougars lost four key players from that team, including star Quentin Grimes, but Sampson reloaded the roster with talented transfers.

Houston needed overtime to beat Hofstra in its opener, but is coming off lopsided wins over Rice and Virginia. The Cougars were at their defensive best in a 67-47 win over Virginia, forcing 17 turnovers while holding the Cavaliers to 4-of-19 shooting from the 3-point arch.

“Maybe we will play some teams as good defensively," Virginia coach Tony Bennett said. "I don’t know if we will play many better than this team because they are special that way. They’re just good all around.”