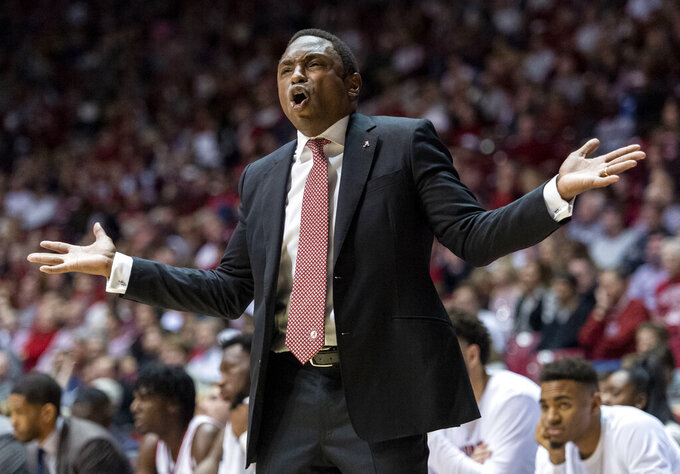 Alabama head coach Avery Johnson reacts to a ref's call against LSU during the first half of an NCAA college basketball game, Saturday, March 2, 2019, in Tuscaloosa, Ala. (AP Photo/Vasha Hunt) 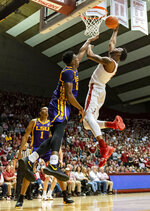 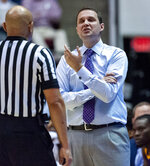 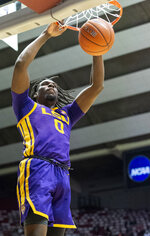 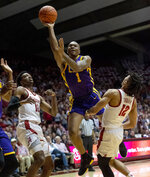 TUSCALOOSA, Ala. (AP) — Tremont Waters swiped a pass and raced toward the basket. Instead of settling for an uncontested layup, LSU's star guard bounced the ball off the glass and a trailing Skylar Mays plucked it from the air for a dunk.

Mays scored 16 of his 20 points in the second half, including that late slam, and Javonte Smart had 19 to lead No. 13 LSU to a 74-69 victory over Alabama on Saturday.

"I'm glad we made it," Tigers coach Will Wade said, straight-faced.

The stakes are high, after all. LSU came into the game tied with No. 4 Kentucky and No. 7 Tennessee atop the league standings, with those teams playing each other Saturday.

The Tigers, who are 8-0 in SEC road games, trailed by six points midway through the second half. They closed on a 17-7 run to maintain a share of the league lead.

Alabama made one final push, with John Petty's 3-pointer with nine seconds left cutting it to 72-69. Mays hit four straight free throws over the final 16 seconds to ice the win, including two after that basket.

"I thought he was phenomenal," Wade said. "He's such a good player, he's such a consistent player for us. He's our best free throw shooter so we felt very confident when he was at the line."

Mays had 14 points over the final 9:37 to help the Tigers pull out the win. He said he wasn't sure what Wade's reaction would have been if he missed his memorable jam.

"This deep in the season, I think Coach would have cut us a little slack," Mays said. "I'd like to say that, but I don't know."

Naz Reid had his second straight double-double with 12 points and 13 rebounds. Waters had five points, four steals and three assists in 24 minutes after missing the past two games with an undisclosed illness.

Petty made five 3-pointers and led Alabama with 23 points. Donta Hall had 14 points and 10 rebounds, and Riley Norris finished with 13 points and nine boards. Herbert Jones, like Norris, delivered a strong performance off the bench with 11 points.

A win would have been a big boost to the Tide's NCAA Tournament hopes.

"Our guys showed a lot of heart, especially when we took the lead in the second half," coach Avery Johnson said. "But our defense just wasn't good enough in the second half overall to win the game. We just had too many breakdowns.

"This was a winnable game for us. There are no moral victories, not here anymore, especially in my fourth year."

Alabama surged into the lead with 10 straight points a few minutes after Johnson was called for a technical foul with 14:12 left. His assistants and son Avery Johnson Jr. had to corral him, but the Tide ultimately went ahead 47-41.

Waters, LSU's leading scorer, entered five minutes into the game and hit a 3-pointer on his first attempt.

"He hasn't gone through a full practice yet," Wade said. "We wanted to play him between 20 and 25 minutes. We're trying to ease him back into things."

LSU: Led by 11 in first half, went through a scoring drought of more than six minutes, and held on for its third straight victory. Hit 50 percent (17 of 34) from the field and made 10 of 11 free throws in the second half.

LSU visits Florida on Wednesday night before facing Vanderbilt in its final two regular-season games in a title bid. "We're going to have to earn it, for sure," Mays said. "But we've got something to be excited about it."