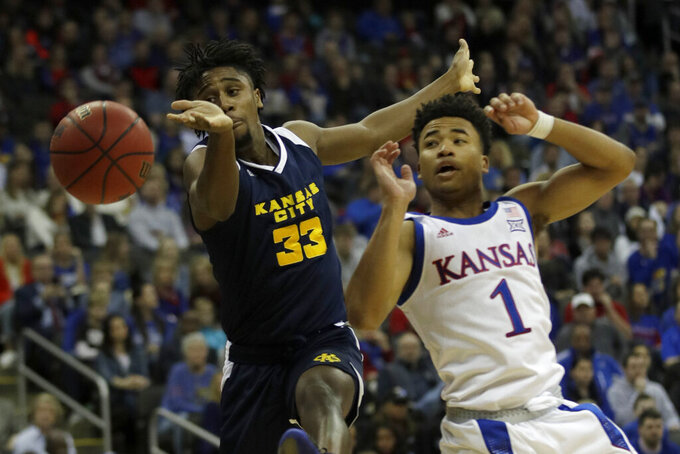 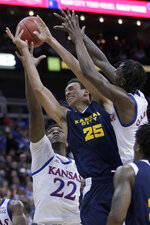 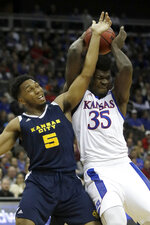 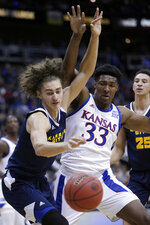 Marcus Garrett added 13 points for the Jayhawks (9-1), who shrugged off a slow start to beat their neighbors from down Interstate 70 for the eighth time in as many meetings. Kansas led 43-24 at halftime, built on the advantage early in the second half and never looked back as it gazes toward a potential No. 1 ranking Monday.

Javan White and Marvin Nesbitt Jr. scored 12 apiece for the Roos (5-7), who committed 22 turnovers and struggled all night with the Jayhawks' length. White, their leading scorer, missed his first seven shots and was just 4 of 13 from the field.

The Jayhawks were coming off a win over Milwaukee in which they roared out of the locker room to start the game.

They showed up with a whimper against the Roos.

Trying to use their size to their advantage, the Jayhawks kept dumping the ball into the post through the first 15 minutes of the game. And when the Roos collapsed on the Kansas big men, they either turned it over, missed a layup or kicked it out to one of the perimeter players — who in turn also missed a series of uncontested shots.

Midway through the first half, Kansas City held an improbable 13-10 advantage.

The Jayhawks finally found their stride, though, embarking on a 13-0 run to gake control. The defensive-minded Garrett provided the offensive spark, finding big man Udoka Azubuike for an alley-oop dunk and then knocking down a 3. By the time Garrett and Dotson went to the foul line for series of free throws, the Jayhawks had a comfortable advantage.

The best offense Kansas ran came in transition, and there were plenty of chances for it. The Roos became careless with the ball after their solid start, committing 15 turnovers as their deficit swelled to 43-24 by halftime.

McCormack put the game away with a monster performance in the first 10 minutes of the second half. The sophomore forward scored 12 of the Jayhawks' first 20 points out of the locker room, and when he checked out to a standing ovation after knocking down a pair of free throws, McCormack had his 28 points — five fewer than the entire Roos team.

Jayhawks coach Bill Self began to empty his bench with out five minutes to go.

Kansas City is in the midst of a total rebuild under new coach Billy Donlon, but the Roos have had moments that indicate progress. Their wins over George Washington, East Carolina and Western Illinois are evidence of it.

Kansas got the final tune-up it expected before the schedule heats up. No. 20 Villanova is next, followed by a trip to Stanford andt he start of Big 12 play. The Jayhawks also have a Big 12-SEC matchup against No. 17 Tennessee in January.

Kansas visits the Wildcats next Saturday.