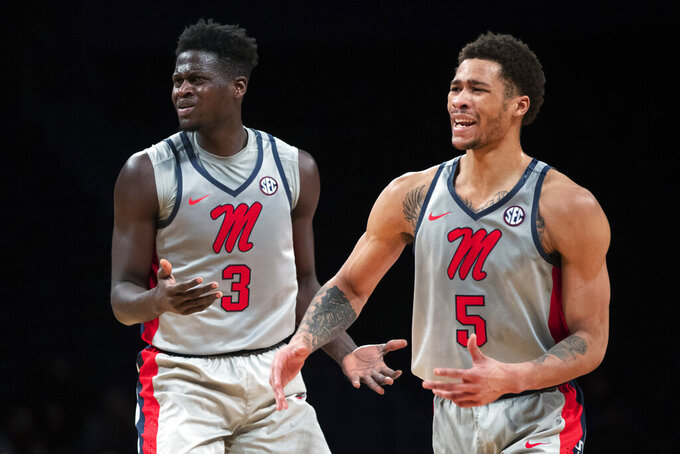 Mississippi forward Khadim Sy (3) and forward KJ Buffen (5) react during the second half of an NCAA college basketball game against the Oklahoma State in the final of the NIT Season Tip-Off tournament, Friday, Nov. 29, 2019, in New York. Oklahoma State won 78-37. (AP Photo/Mary Altaffer)

Kermit Davis was unable to recall such an across-the-board loss.

Call it opposite sides of the same coin.

“Tonight was a good night to be a Cowboy,” Boynton said after Oklahoma State routed Mississippi 78-37 in the championship game of the NIT Season Tip-Off on Friday night at the Barclays Center.

“Guys played with a great sense of purpose and determination,” Boynton said. “I think we beat a pretty good team.”

Antavion Collum and Tyree each had seven points to lead Ole Miss (5-2).

The Cowboys took control with an 18-1 run over the last 7:53 of the first half to go into halftime with a 34-15 lead. Dziagwa knocked down two 3-pointers in the run, while McGriff, Anei, and Waters III all contributed four points.

“We didn’t have a very good day of preparation,” Davis said. “Leadership was bad. I take full credit.”

“It’s embarrassing and disappointing,” Davis said. “Really embarrassing. We just didn’t compete the right way. Leadership on our team wasn’t very good. We didn’t have a guy that played. (We didn’t) have one guy that you can really say, ‘(That) was one guy who really tried to play.’ We didn’t compete very hard.”

Oklahoma State: OSU pressured Mississippi ball-handlers, took away passing lanes, and contested shots. The Cowboys forced 20 turnovers, allowed them to get into their transition game and outscore the Rebels 18-4 in fast-break points. ... It was the Cowboys’ largest margin of victory since beating Oral Roberts 91-48 on Nov. 16, 2017 and their fewest points allowed since an 81-29 win over Washington State on Dec. 4, 2004.