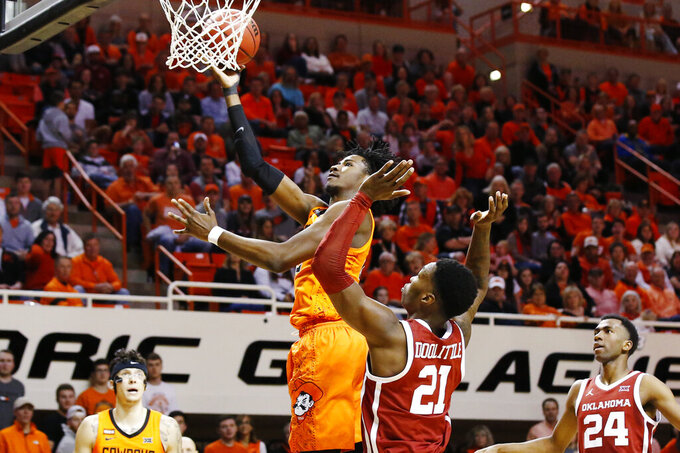 STILLWATER, Okla. (AP) — Cameron McGriff stepped up to be the exactly player Oklahoma State coach Mike Boynton has been looking for.

McGriff also was the primary defender on Brady Manek, the Sooners' No. 2 scorer for the season. Manek, who scored 30 points in Oklahoma's win over the Cowboys earlier this month, finished the rematch with two points on 1-of-8 shooting.

After that first meeting, Boynton said he needed someone to do what Manek did and "grab the bull by the horns." On Saturday, McGriff made 11 of 17 shots, grabbed seven rebounds and harassed Manek.

“Cam McGriff, as good as he was on the offensive end — and he made shots consistently today — he was also assigned to guard Brady Manek, so he did it on both ends of the court," Boynton said.

Boynton said McGriff, a powerful 6-foot-7 forward, was progressing the past six weeks towards the kind of performance he had on Saturday.

“Cam, for the better part of a month, has been our most consistent player, quite honestly,” Boynton said. “Even in the games we haven't won, he's played the right way and the way that we need more guys to play like.”

“I'm extremely proud of all these kids,” Boynton said. “This year, as a whole, hasn't gone the way we expected. We're hopeful, there's still a lot to play for out there for us. They just keep responding; today was another opportunity.”

Austin Reaves scored a career-high 24 points and Kristian Doolittle and De'Vion Harmon each added 11 for Oklahoma (16-11, 6-8), which lost its third straight.

“I thought Oklahoma State was the aggressor, and they were terrific in every way,” Oklahoma coach Lon Kruger said. “I thought they were quicker in everything, especially in the last 30 minutes. Congrats to them and we'll learn from it.”

Oklahoma State outrebounded Oklahoma 43-30 and held the Sooners to 38% shooting.

“It's who we have to be,” Boynton said. “We have to be kind of a rugged team. We don't have an overwhelming amount of high-end talent. We have really good kids who work really hard who have some talent, but they need each other, and they've bought into that.”

Oklahoma led 21-11 before Oklahoma State responded with a 16-2 run to take the lead. McGriff scored 16 points in the first half to help Oklahoma State take a 42-36 lead at the break.

Oklahoma State started the second half with an 8-0 run to take a 50-36 lead. Thomas Dziagwa's 3-pointer from just inside the mid-court logo as the shot clock wound down gave the Cowboys a 57-42 lead.

McGriff's 3-pointer with five minutes to play put Oklahoma State up by 16, and the Cowboys controlled the game from there.

Oklahoma: The Sooners were coming off losses to No. 3 Kansas and No. 1 Baylor, but this one was much harder to understand, even though the Cowboys have clearly improved. The NCAA Tournament selection committee might not like this one.

Oklahoma State: The Cowboys continued their momentum and look like the kind of team no one wants to face heading into March.

Oklahoma's Victor Iwuakor was called for a technical after shoving Boone with 2:17 remaining, and Oklahoma's Jamal Bieniemy and Oklahoma State's Isaac Likekele were called for double technicals with 2:08 to go.

Kruger on Oklahoma's NCAA Tournament hopes: “We're going to worry about the next game like everyone. Certainly, it could go either direction for any team right now. Four games left in conference play, and we have to have the attitude that each game is the one we have to win.”