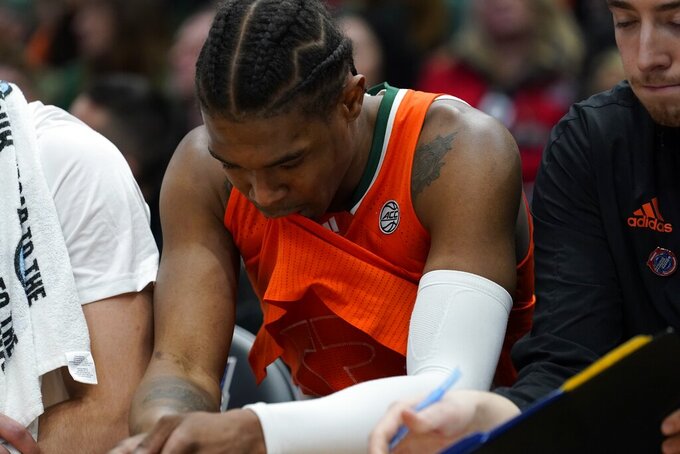 Miami's Kameron McGusty sits on the bench during the second half of a college basketball game in the Elite 8 round of the NCAA tournament Sunday, March 27, 2022, in Chicago. (AP Photo/Charles Rex Arbogast)

CHICAGO (AP) — Miami's Kameron McGusty slapped hands with teammate Bensley Joseph on the way off the court and embraced teammate Charlie Moore and coach Jim Larrañaga in a long three-way hug by the scorer's table.

With a few minutes remaining, they all knew the Hurricanes' season was over.

Instead of a trip to the Final Four, 10th-seeded Miami (26-11) got run over in the second half and knocked out by top-seeded Kansas 76-50 in the Midwest Region final on Sunday.

“It's definitely very frustrating,” said McGusty, who scored 18 points. “More than anything, it just hurts because this is a close-knit group of guys. ... We just have such a special season. Being able to accomplish the things we did this year — to lose, it just hurts. We've done a lot. We've gotten so close. I'm gonna miss playing with these guys.”

Miami had never advanced past the Sweet 16. That changed when the Hurricanes beat Iowa State on Friday.

A sixth-year senior who played two seasons at Oklahoma before transferring to Miami, McGusty did all he could to keep this run going.

He was locked in through the first 20 minutes, scoring 14 points as the Hurricanes grabbed a 35-29 lead. From there, everything changed.

Kansas took McGusty out of his rhythm with a box-and-one defense and outscored Miami 47-15 over the final 20 minutes to advance to the Final Four for the 16th time.

“The first half I was very comfortable,” McGusty said. “I was able to get to my spots. My teammates were looking for me. They know when I see a couple go in that I can have a big night. So they just kept feeding me the ball. The coaches kept calling plays for me. And it was all working out.”

While Kansas turned its attention toward a semifinal matchup with Villanova in New Orleans, Miami is looking ahead after a bitter ending to an otherwise sweet season.

“Just knowing it’s the last time on the floor, probably take a minute after we settle down and everything,” said Moore, Miami's veteran point guard. “I just love these guys. I’m happy for the season we had. I’m just excited for the season we’ve had, to be honest.”

The Hurricanes managed to jump into the spotlight at a school where football has dominated for decades.

“They accomplished so much,” Larrañaga said. “Not just in basketball, but they ignited a community. We had so much support throughout the season and especially in the NCAA Tournament.”

Larrañaga once led George Mason on a gripping Final Four run and now has an Elite Eight and two other Sweet 16 appearances in 11 seasons at Miami. That's no small accomplishment at a school that didn't have a basketball team from 1971 to 1985.

As far as the Hurricanes are concerned, this is just a start. They see bigger things coming.

Miami was hurt in recent years by an FBI investigation into corruption in college basketball that raised questions about Larrañaga’s program, though no wrongdoing by him surfaced. The team endured three straight losing seasons and went 10-17 a year ago before making a huge jump.

The arrival of Moore, who started games at California, Kansas and DePaul before transferring, gave the Hurricanes a steady hand at point guard and helped lift the program.

Getting forward Sam Waardenburg back for a sixth season after he sat out last year because of a foot injury was another boost.

So was McGusty's decision to return after declaring for last year's NBA draft.

“I told all the younger guys in the locker room, I told them I loved them,” McGusty said. “I told them to take care of this place for the next three years that y’all are here.”