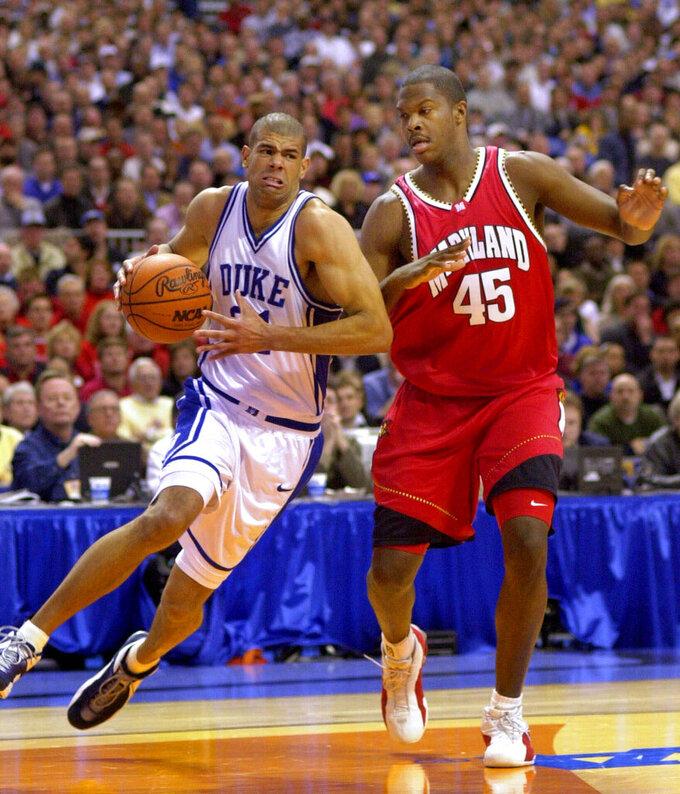 FILE - Duke's Shane Battier drives on Maryland's Tahj Holden during the second half of Duke's 95-84 win in the semifinals of the NCAA men's college basketball tournament in Minneapolis on March 31, 2001. Duke set a record for biggest Final Four comeback. (AP Photo/Jim Mone, File) 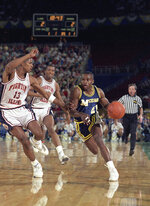 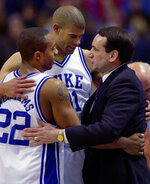 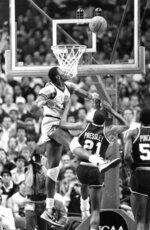 Part of the NCAA Tournament's charm is that it can pit schools from different corners of the country against each other. Teams that might go years without scheduling each other during the regular season end up matched in some of the biggest games of the year.

Every now and then, however, there's a Final Four matchup with a lot more familiarity — when teams from the same conference meet at this stage. It's still rare enough to stand out when it happens, and this week Duke and North Carolina will play in an all-ACC semifinal.

Here are a few other particularly memorable matchups between league rivals at the Final Four:

Needing one more win to secure an unbeaten national title — something no men's team has accomplished since — Indiana faced a familiar Big Ten foe. Michigan, which had lost to the Hoosiers by six that January and then took Indiana to overtime the following month, presented a potential roadblock for Bob Knight's team.

The Wolverines led by six at halftime before Indiana scored 57 points in the second — a title game record for either half.

After beating St. John's in the semis, Georgetown went up against another Big East rival and fell short in its bid for a second straight title. Villanova shot 79% from the field — a Final Four record — but this upset was about more than shooting.

The Wildcats kept their cool against Georgetown's pressure defense, and they prevented Patrick Ewing from dominating inside. They also were able to shorten the game a bit with some well-timed stalling, since there was no shot clock.

After the highest-scoring half in title game history, these two Big Eight teams entered the break tied at 50. Oklahoma forced plenty of miscues with its pressure defense, but Kansas kept it close with shooting reminiscent of Villanova three years earlier — except at a faster tempo and with 3-pointers.

Ultimately, this game and this tournament were about Danny Manning. The Sooners simply couldn't overcome him.

Interim coach Steve Fisher guided the Wolverines to a national title, beating Seton Hall in overtime for the championship. One game earlier, Michigan won another nail biter against one of its Big Ten rivals.

After 33 lead changes, it was tied at 81 when Sean Higgins scored off an offensive rebound in the final seconds to send the Wolverines to the title game.

Around the turn of the century, Maryland was a major power in the ACC. The Terrapins played Duke four times in 2001, but won just once. The Blue Devils wiped out a 10-point deficit in under a minute at the end of regulation, eventually beating the Terps at Maryland. The Terrapins avenged that with a victory at Duke later in the season.

The Blue Devils edged Maryland in the ACC Tournament, but the Terps weren't intimidated at the start of their Final Four matchup, racing to a 39-17 lead. Duke was within 11 at halftime, and the Blue Devils ended up winning by that margin, setting a record for biggest Final Four comeback.

Duke went on to beat Arizona for the championship. Maryland went on to win it all the following year.