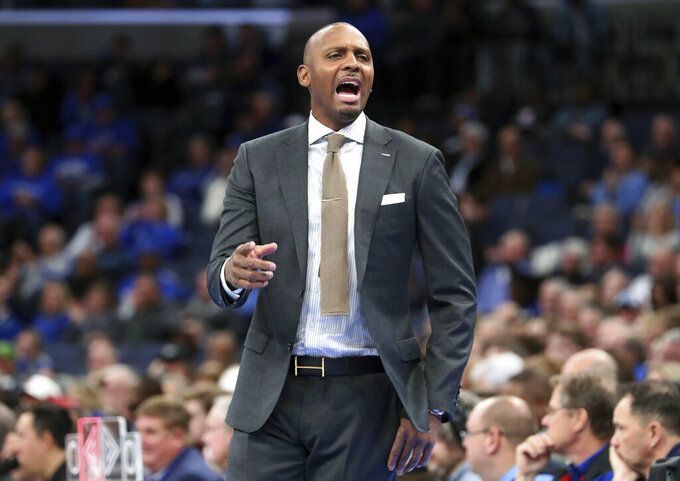 Memphis' head coach Penny Hardaway calls to his players in the first half of an NCAA college basketball game against Bradley Tuesday, Dec. 3, 2019, in Memphis, Tenn. (AP Photo/Karen Pulfer Focht)

KNOXVILLE, Tenn. (AP) — The future of the Memphis-Tennessee men’s basketball series faces uncertainty as the in-state rivals prepare to face off in a Top 25 showdown.

Saturday’s matchup between the 13th-ranked Tigers and 19th-ranked Volunteers at Thompson-Boling Arena is the second meeting in a three-game contract. Tennessee won 102-92 at Memphis last season, and the teams square off again next season in Nashville.

But there’s no indication whether the matchups will continue once the current contract expires.

Memphis coach Penny Hardaway has said “it’s important” for the teams to continue facing each other regularly, but Tennessee coach Rick Barnes was noncommittal on the series’ future earlier this week.

“I don’t know where it goes from here,” said Barnes, who is seeking his 700th career win Saturday.

The matchup is producing a sellout crowd for a second straight season as Tennessee chases its 32nd straight home victory. Tennessee was ranked No. 1 for nearly a month last season, while Memphis brought in the nation’s top-ranked recruiting class this year.

“It’s just not another game,” Hardaway said. “I know it’s early in the season, but some games are just important and this is one of them.’’

That certainly was evident from some of the comments that followed last year’s game, which may help explain the series’ uncertain long-term prospects.

Last year’s Memphis-Tennessee matchup marked the first time the two programs had faced each other since January 2013. Negotiations to renew the series began when Tubby Smith was coaching Memphis, though the contract wasn’t officially announced until Smith had been fired and Hardaway had been hired to replace him.

Hardaway was critical of Barnes and Tennessee after last year’s game.

The teams combined for 57 fouls, including technical fouls on Tennessee’s Jordan Bone and Memphis’ Alex Lomax in the final minute. Hardaway said afterward that “you can visibly see (Tennessee) guys with their fists balled, talking to trash to our guys or whatever it was, almost like a standoff.”

Barnes noted that he never saw any evidence supporting Hardaway’s comments and joked on his radio show by asking host Bob Kesling if he ever considered balling up his fist and fighting the Memphis’ radio broadcaster. On that same radio show, Barnes said the NCAA should consider penalizing players for “flopping,” or pretending they’ve been fouled.

Hardaway believed Barnes’ flopping comments were directed at his team and said, “I think it’s kind of low class, how he’s trying to downgrade my guys for flopping and all that. Come on, give me a break.”

Both coaches have tried this week to downplay what was said last season.

“I just think people have tried to make something out of nothing,” Barnes said. “I’ve got great respect for what (Hardaway’s) done and I know what he means to Memphis and the program he’s built there. He’s done a great job recruiting and does a great job of coaching his guys.’’

Hardaway said he believes the hard feelings late in last year’s game were the by-product of a Memphis program trying to gain respect in a rivalry matchup with a Tennessee team near the top of the rankings.

“I’ve always had a lot of respect for coach Barnes,” Hardaway said. “I was just protecting my team last year. It’s unfortunate that it got taken out of hand last year with what happened.”’

The teams have changed quite a bit since that game. Tennessee’s Jordan Bowden and John Fulkerson and Memphis’ Tyler Harris and Lomax are the only guys from either team who played at least 15 minutes in last year’s matchup. An injury prevented Tennessee fifth-year senior guard Lamonte’ Turner from playing against Memphis last year.

Both teams have plenty of new faces ready to make an impact on this rivalry, though Memphis will be missing suspended freshman center James Wiseman and likely will be without injured freshman guard Lester Quinones.

“Everybody on the team is excited,” Tennessee freshman forward Olivier Nkamhoua said of the game against Memphis after the Vols beat Florida A&M 72-43 in their last game. “We want to play that game. That’s one of the biggest games we’ve all been looking forward to.”

How many more times fans can look forward to Memphis-Tennessee matchups remains up in the air.

“I think (the series has) been good for everybody,” Barnes said. “I think it will be good for us next year in Nashville. But as your schedule opportunities come up, you’ve got to look at it and evaluate it.”