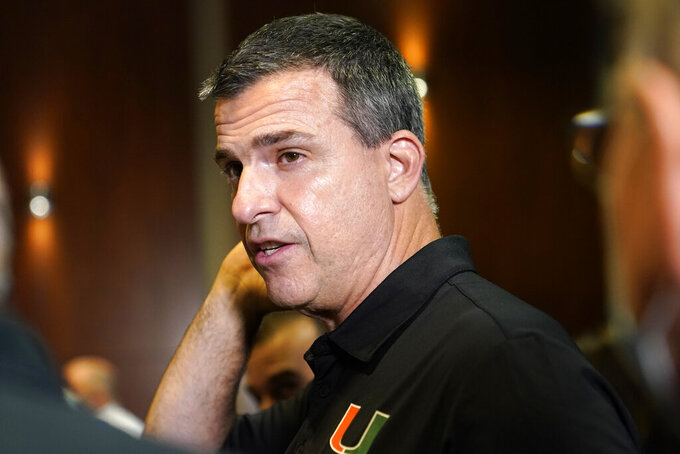 The Miami Hurricanes' plans to play in the Sun Bowl on Dec. 31 appear to be uncertain at best, after the school announced Tuesday that its football program has entered COVID-19 protocols.

The Hurricanes did not say how many players or coaches are currently dealing with virus-related issues. The team was scheduled to resume bowl practice in earnest this week after taking last week off for finals.

Miami (7-5) is scheduled to play Washington State (7-5) in El Paso, Texas. Officials in El Paso said earlier this week that their city has seen a COVID-19 positivity rate of about 15% in the past week.

“The university remains committed to its goal of participating" in the bowl game, the Hurricanes said, “while ensuring the continued health and safety of its student-athletes, coaches and staff."

Meanwhile, just as was the case with Miami's women's basketball team earlier this week when it had to take a forfeit loss against Atlantic Coast Conference rival Duke because of virus issues, COVID-19 concerns at Georgetown and Boston College have caused both teams to suffer forfeits in their conference standings.

The leagues announced the cancellations Tuesday. In both cases, the forfeits will count only in the league standings and won't affect the overall record.

In the ACC, Boston College's next scheduled game is Dec. 29 at home against Florida State. Wake Forest is also scheduled to play that day at Louisville, which paused team activities Monday due to multiple positive tests and had to cancel its rivalry game with No. 20 Kentucky.

In the Big East, Georgetown — coached by former Hoyas and NBA great Patrick Ewing — is scheduled to play next Tuesday at Creighton. Providence hosts No. 15 Seton Hall on Dec. 29.

Coppin State canceled two road games — Thursday against George Mason and Dec. 29 against Indiana State — due to positive tests within its program. The Eagles are due to return to action Jan. 8 at South Carolina State to open Mid-Eastern Athletic Conference play.

Memphis (6-4) is on a break after COVID-19 issues forced the Tigers to cancel last weekend’s game against then-No.18 Tennessee in Nashville with an announcement coming within 75 minutes of the scheduled tip time. Memphis also had to postpone Tuesday night’s scheduled game with Alabama State.

No. 24 Wisconsin, which had its game against Morgan State on Thursday canceled because of COVID-19 issues in the Bears program, found a new opponent. The Badgers will now host George Mason on Thursday.

In women's basketball, eighth-ranked Indiana said its Tuesday game against Wright State is canceled due to positive tests within the Wright State program. The game will not be made up.

Wright State had now played once since Nov. 24 and had two Horizon League losses by forfeit.