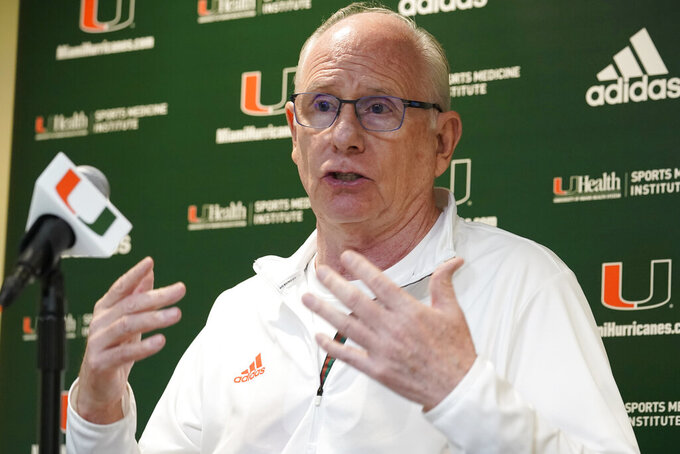 CORAL GABLES, Fla. (AP) — It’s almost like Miami coach Jim Larrañaga wrote the script. A game against his alma mater, one win away from a milestone few have reached.

That’s the scenario on Saturday.

Larrañaga and Miami take on Providence in the opening round of the Naismith Basketball Hall of Fame Tip-Off Tournament in Uncasville, Connecticut — with the Hurricanes’ coach, and 1971 Providence graduate, entering with 699 career wins.

“People talk about milestones,” Larrañaga said. “I’ve been at this a long time. I enjoy the coaching. If I get to my 700th win, I’m hoping it will be this season. I hope I don’t have to coach another year to get to it. Only got one more to get; I’m assuming I’ll get there at some point. But quite honestly, it’s more about this team trying to play its best basketball on Saturday at 4 o’clock against a very fine opponent.”

When Larrañaga — who is in season No. 39 as a head coach — gets there, he will become the 34th Division I men’s coach with 700 wins on his official NCAA resume, and the ninth active coach on that list. Iona’s Rick Pitino likely will be next; he needs 15 more to officially reach 700.

At 73, Larrañaga shows no signs of slowing down. Miami won 26 games last season and reached the Elite Eight, falling there to eventual national champion Kansas, in Larrañaga’s deepest postseason run since taking George Mason to the Final Four in 2006. This season’s Miami team has opened with three double-digit wins, and a win over Providence would move the Hurricanes to 4-0 for the first time in the last four years.

“Coach L, obviously, he’s been doing this for many years,” Miami guard Bensley Joseph said. “I feel like it’s just instilled in his mind, what he preaches, what he wants from us players and his message to us is very on-point, very understandable. However many years Coach L goes, he just doesn’t want to stop. Basketball is instilled in his mind. He loves the game. He loves us players. He wants us to be great at life and on the court.”

Larrañaga’s career started when he was 27, hired at Division II American International. He won his first game, 84-66 over UMass-Boston.

The game has changed quite a bit since then. Larrañaga hasn’t.

Guests at practice are greeted with handshakes from every player. Practices begin with some inspirational words, not always said by Larrañaga either. The tenets of Miami basketball — “the 10 habits,” he calls them — are repeated. It sets a tone, and the Hurricanes get to work.

“We do it every day,” Joseph said. “Coach L is like a teacher to us. I love learning from him.”

Turns out, Larrañaga has been that way from the beginning.

Major Jennings is the principal at Buzz Aldrin Middle School in Montclair, New Jersey. He was a longtime high school basketball and volleyball coach, and some of the lessons he taught those teams were ones he learned from Larrañaga — his coach at American International. Jennings led Larrañaga's first team in scoring.

“You could tell he knew the game," Jennings said. “He wasn’t a yeller. He was more of a instructor. He’s a great teacher. He always had a detailed report on the opposition, their strengths, their weaknesses, what we had to do to be successful."

When Larrañaga went to the Final Four in 2006, Jennings had to go as well to show his respect.

“It really means so much to see a really good guy starting his coaching days at the Division II level and working his way up," Jennings said. “He always aspired to get better, to be better and to be a part of his legacy in a really small way from a small school in New England makes me feel tremendously blessed."

Larrañaga still ranks among Providence’s career scoring leaders. The short shorts, replete with metal belt buckle, of that era send his grandchildren into hysterics when they see the photographs. But his game was no joke; he had a 20-point, 15-assist, 12-rebound triple-double when he was there, though some of the details of that game escaped him until reminded about it this week.

He’s also 0-2 against Providence (3-0) as a coach. Those losses have not been forgotten.

Larrañaga’s first time coaching against Providence was in the championship game of the 1989 Fleet Basketball Classic. The other was a matchup in the 2014 Brooklyn Hoops Holiday Invitational.

But weirdly, had either of those games gone Larrañaga’s way, he wouldn’t have had the chance that now awaits. He’d have No. 700 already.

“I think beating Providence anytime in basketball is a big accomplishment,” Larrañaga said. “But it’s not about my wins. It’s about this year’s team.”