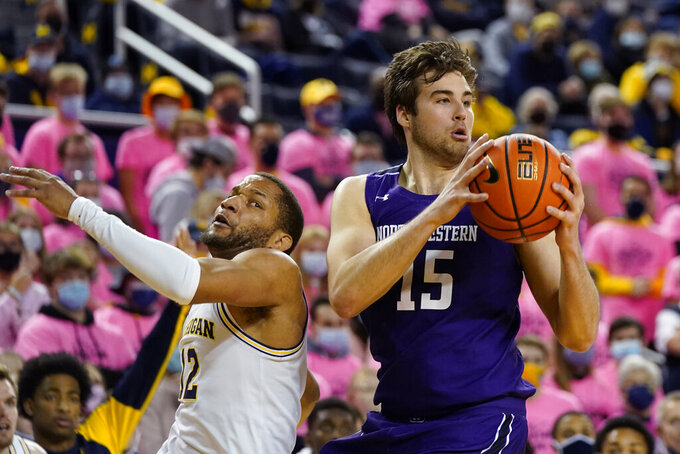 Michigan forward Jaron Faulds missed two free throws, leading 72-69, with 8.5 seconds left and the Wolverines elected to foul Boo Buie near midcourt before he could attempt at 3-pointer. Buie, an 80% free-throw shooter, made the first free throw and missed the second but Pete Nance grabbed the rebound and got it to Julian Roper for a 3-pointer that didn’t hit the rim at the buzzer.

Eli Brooks added 12 points for Michigan (10-7, 4-3 Big Ten), which has won its last 10 homes games in the series. Houstan, the Big Ten freshman of the week after making 8 of 11 from long range in his last two games, was 5 of 7 from the field with three 3s. Hunter Dickinson, entered having scored 20-plus in four of his last five games, was held to nine points in 29 minutes before fouling out with 2:29 left.

Nance had 14 points, six rebounds and four assists for Northwestern (9-9, 2-7), which has lost seven of its last eight. Buie and Ryan Young each finished with 13.

Both teams play against ranked opponents on Saturday. Michigan is at the 10th-ranked Spartans, and Northwestern hosts No. 24 Illinois.