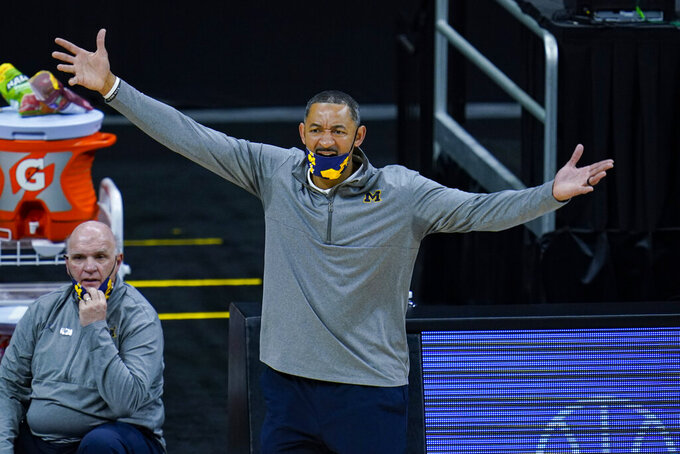 Michigan head coach Juwan Howard questions a call as his team played against Ohio State in the second half of an NCAA college basketball game at the Big Ten Conference tournament in Indianapolis, Saturday, March 13, 2021. (AP Photo/Michael Conroy)

Juwan Howard reflected recently on his first two seasons as Michigan’s coach — how the coronavirus pandemic shut down last year’s postseason, then forced the Wolverines to take a lengthy break in the middle of their 2020-21 campaign.

Along the way, there were other inconveniences and potential distractions, such as the daily virus testing that serves as a constant reminder that the start of Howard’s tenure in Ann Arbor has been anything but normal.

“But if someone asked me if I wanted to still be the head coach of the University of Michigan, with that as the plan,” Howard said, “I would say yes.”

When John Beilein left the Wolverines for the NBA nearly two years ago, it was fair to wonder where the Michigan program was headed. There was no obvious choice to replace the man who had pulled the Wolverines out of mediocrity and taken them to two Final Fours.

A couple seasons later, Michigan fans can breathe a little easier. In fact, Howard has already accomplished something Beilein didn’t, guiding the Wolverines to their first No. 1 seed in the NCAA Tournament since 1993.

Howard, of course, played for that Michigan team in ‘93 as part of the Fab Five, so he understands how significant this event can be.

“He did talk to us about how the tournament can really set you up for life, basically, if you do well,” freshman center Hunter Dickinson said. “This is a big kind of opportunity for a lot of players on the team to kind of make their name during the tournament, and I think as long as we play together as a team and share the game, I think everybody would be able to get the amount of recognition that they want.”

The main questions when Howard arrived were about his experience. He’d been an assistant with the Miami Heat, but this was his first head coaching position. It was a new level of responsibility. Now Howard would be the man players looked to for leadership.

“My role with Miami, I was more the guy that was sitting in the weeds, just listening and doing a lot of listening instead of doing a lot of talking,” said Howard, who won Big Ten coach of the year honors this season. “You have to be ready to make decisions, and some of them are tough decisions, and you also at the end of the day have to be comfortable with the end result of a decision. I’m not saying you’re going to always get it right.”

Howard won his first seven games with the Wolverines, including victories over North Carolina and Gonzaga at a tournament in the Bahamas. Michigan was 19-12 when the 2019-20 season was cut short because of the pandemic.

Nothing has been the same since then, but when they took the court again last November, the Wolverines and their coach were ready.

“I was really impressed with how he handled everything, how composed he was even though it was so frustrating, for him as a coach, too, that we couldn’t practice and couldn’t play our normal schedule,” sophomore Franz Wagner said. “I think really his character and how he handles things really rubs off on the team.”

This season Michigan won its first 11 games. The Wolverines were 13-1 when the school’s whole athletic department paused activities as a virus-related precaution. Howard’s team would go over three weeks between games.

The abrupt break could have derailed the team, but instead the Wolverines seemed to take it in stride. They won hard-fought victories at Wisconsin and Ohio State after returning and eventually wrapped up the Big Ten title.

En route to a 14-3 conference record, Michigan had beaten Minnesota by 25, Wisconsin by 23, Maryland by 24, Purdue by 17, Iowa by 22 and Michigan State by 19. It was an impressive display against a conference with several highly ranked teams.

It’s rarely that easy, of course, and now the Wolverines enter the NCAA Tournament having lost three of their last five games. Howard’s own composure deserted him during the Big Ten Tournament when he was ejected during a win over Maryland.

Michigan announced last weekend that sharp-shooting senior Isaiah Livers would be out indefinitely with a foot injury. That means Howard and the Wolverines have another test to deal with after rising above plenty of challenges already.

No matter what happens over these next couple weeks, however, Michigan’s program marches on. Howard’s 2021 recruiting class is currently ranked No. 1 in the country by 247Sports.

“He’s a high-character dude who treats everybody like family, so to be able to see someone like that succeed when a lot of people doubted him— he put his name up there,” senior guard Eli Brooks said. “It’s fun to play for Juwan, and he’s a great guy, so I’m happy for him.”