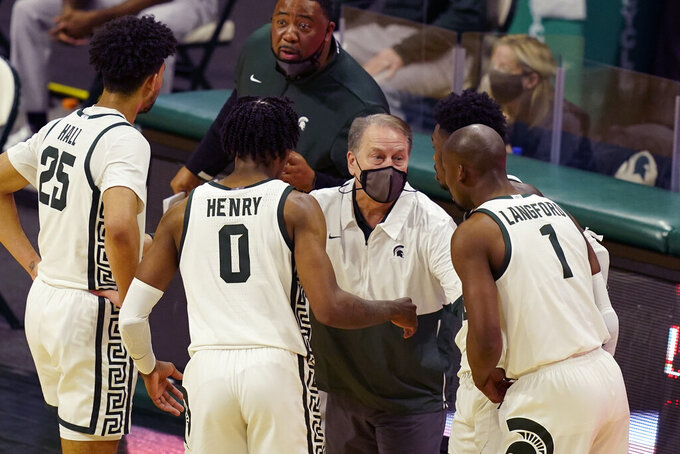 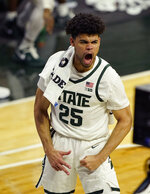 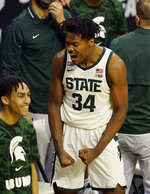 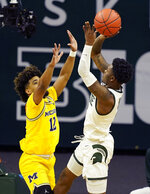 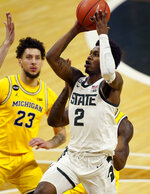 EAST LANSING, Mich. (AP) — Michigan State's NCAA Tournament streak under Hall of Fame coach Tom Izzo appears to be alive and well after it was in dire straits a month ago.

Rocket Watts scored 21 points and Aaron Henry had 18 to lead the Spartans in a 70-64 victory over No. 2 Michigan on Sunday that seems to seal Izzo's 23rd consecutive appearance in college basketball's showcase.

“I bet I never go through that again in my career," Izzo said.

The Wolverines (19-3, 14-3) closed the regular season getting routed at home by the Fighting Illini, beating Michigan State handily to clinch the Big Ten title and losing the rematch three days later.

Senior guard Eli Brooks hurt his left ankle early in the game at the Breslin Center and did not return in what potentially could be a problem going into the Big Ten and NCAA tournaments. Coach Juwan Howard did not have an update on Brooks after the game.

The Wolverines wrapped up the conference championship Thursday night with a 69-50 win over the Spartans as Franz Wagner scored 19 points and Hunter Dickinson adding 14.

Michigan's dynamic duo struggled Sunday, missing 4 of 5 shots in the first half and combining for five points. Both bounced back in the second half as Dickinson finished with 12 points while Wagner had 10 points.

Reserve Chaundee Brown scored 13 points, Mike Smith added 11 and Isaiah Livers had nine for the Wolverines, whose last lead was 21-19 early in the game.

“We come here complacent, get blasted," Livers said. “That’s just how it works in college basketball. They were ready to play today and we weren’t.”

Joey Hauser scored nine of his 11 points off the bench in the first half as Michigan State led 30-26. The Spartans pulled away and were ahead 55-44 with 5:58 remaining and made enough free throws in the final minutes to hold off the Wolverines.

“You have to be ready to play from start to finish, versus a team that," Howard said. “You won convincingly in your building, and now you play in their building. A team like that, one of the things that they pride themselves on is physicality."

Watts had one of the best games three days after he was benched for much of the second half at Michigan after not diving onto the floor for a loose ball.

“I was real mad at myself, not at the coaches," Watts said. “I know I could’ve played better and harder at Michigan."

Watts said his mother attended a game for the first time in his two seasons.

“She’s not really into basketball and sports," said Watts, adding his mother calls him after every game.

Izzo embraced Watts after the game and saw tears in his eyes, an emotional reaction to having his mother in the stands.

“That was pretty cool," Izzo said.

Illinois (20-6, 16-4) made a case Saturday after beating No. 7 Ohio State that it deserved to be recognized as Big Ten champions after winning two more conference games than the Wolverines, who played 17 of 20 games because of a COVID-19 pause, and beat them 76-53 on March 2.

“I don’t get into that stuff," Howard said. “You’re not going to get any sound bites from me."

Fifth-year senior Joshua Langford, who missed much of the previous two seasons with injury, made a 3-point shot with 49 seconds left to give Michigan State a 64-59 lead.

“I was standing right next to him and I told him to shoot it before he caught it,” Izzo recalled. “He went straight up and straight down and it was as picture perfect as you can get.”

Michigan: Brooks had a protective boot on his left leg as he watched the second half. If he is out for an extended period of time, that could hurt the team's national championship hopes. Brooks ranks fourth on the team with eight-plus points per game, averages nearly three assists a game and has started 51 games over two seasons.

Michigan State: The NCAA Tournament will likely include the Spartans, whose spot in college basketball's showcase was in doubt last month when they lost four straight and were reeling from a COVID-19 outbreak.

“I’m not politicking for anything," Izzo said. “We did about everything we could do."

Michigan will likely slip a little in the Top 25 with the setback and potential loss of Brooks.

The Big Ten Tournament begins Wednesday in Indianapolis, where first-seeded Michigan may meet Michigan State for a third time.