Michigan State, Michigan in Sweet 16 because of defense 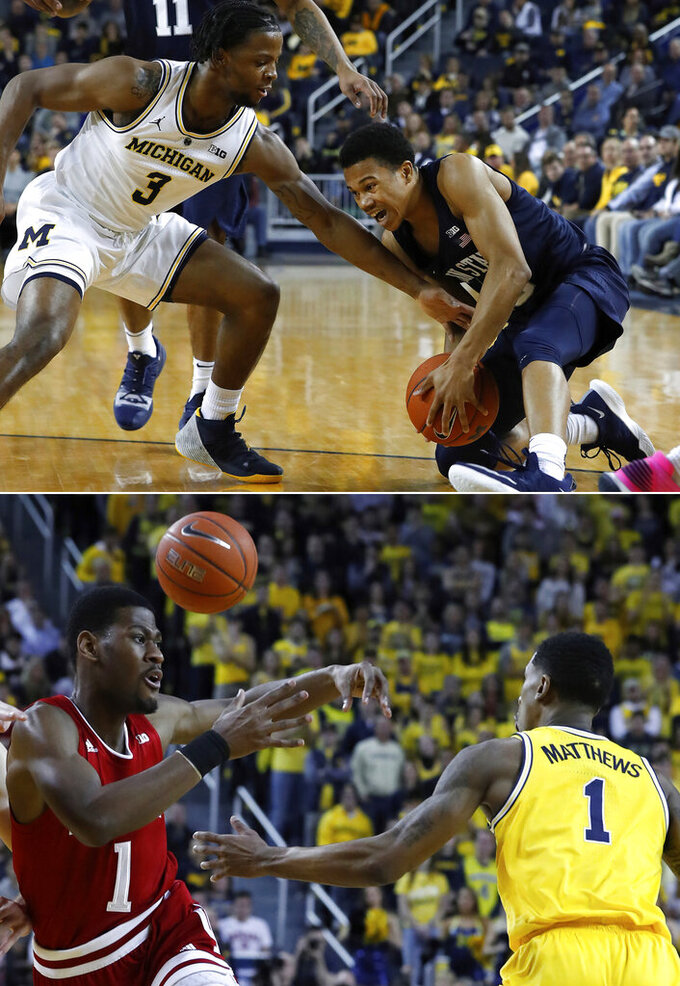 EAST LANSING, Mich. (AP) — Put aside all that talk of a rivalry for a second. Right now, Michigan State and Michigan actually have a lot in common.

Both teams are in the Sweet 16 because of their defense.

Two more wins for each, and Michigan State and Michigan would meet in a Final Four matchup that would have an entire state on edge. Both will be tested plenty before then, but if they defend as they did last weekend, they can play with anyone.

"I just think we've been real solid defensively," Spartans forward Kenny Goins said. "It's not like we're going to go up and get the jam blocks that are above the rim, skying high for them. We get more of the ones when it's right at the start of your shot."

The numbers at kenpom.com offer some insight into what makes these teams tough. Michigan is No. 2 in the country in adjusted defensive efficiency, and Michigan State is No. 8, but they've accomplished that in slightly different ways. The Wolverines are led by Zavier Simpson and Charles Matthews, two standout defenders on the perimeter.

Michigan opponents are attempting just 29.9 percent of their shots from 3-point range, the third-lowest mark in the nation, and they're making only 29 percent of them. Florida went a respectable 9 of 26 beyond the arc, but the Gators made only three 3s in the second half.

"We wanted to shut off their water," Matthews said. "They were getting open looks and our coaching staff did a great job of recognizing that and we just followed the game plan."

These past couple of seasons have been quite a transformation for a Michigan program that was previously known more for the offensive wizardry of coach John Beilein.

Assistant coach Luke Yaklich has received much of the credit for the team's stingy defense, and the players have bought in . Michigan went all the way to the national title game last year before losing to Villanova.

Michigan (30-6) has a rim protector in 7-foot-1 Jon Teske, but shot blocking is more of a strength for Michigan State than Michigan.

The Spartans (30-6) haven't been good at all at forcing turnovers, but they're 18th in the country in block percentage and third in 2-point defense — opponents are shooting 41.4 percent inside the arc. Last season, Michigan State led the country in those two categories, but the Spartans lost 6-foot-7 Miles Bridges and 6-foot-11 Jaren Jackson Jr. to the NBA.

Jackson led the team with 106 blocks last season, more than twice as many as any teammate, but Michigan State still has plenty of guys who can protect the paint. Xavier Tillman has 60 blocks, Goins has 49 and Nick Ward has 39.

"We led the conference in blocked shots, and I keep saying, who's doing it? Jaren coming back as a ghost or what? It's been strange," coach Tom Izzo said. "So that was a stat that blew me away that was a really important stat last year, and I didn't think it would be one this year."

Michigan State takes on LSU (28-6) on Friday night in the regional semifinals, and Michigan plays Texas Tech (28-6) the previous night. They'll be on different sides of the country now — and let's be honest: Many fans of the Spartans and Wolverines will probably be rooting against each other.

But there's a healthy respect between these programs, and last weekend, they achieved success with similar performances.

"We only scored 64 points," Beilein said. "These guys holding them to 49 points is incredible, and that's how we won the game."