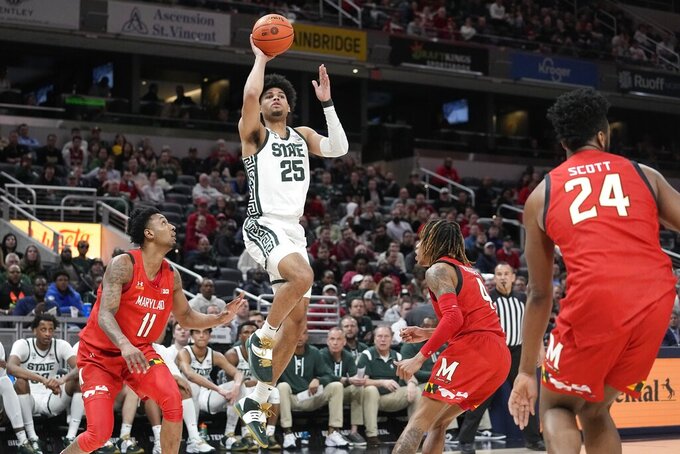 Michigan State's Malik Hall (25) puts up a shot against Maryland's Xavier Green and Fatts Russell (4) during the second half of an NCAA college basketball game at the Big Ten Conference tournament, Thursday, March 10, 2022, in Indianapolis. (AP Photo/Darron Cummings)

Michigan State had a 20-point lead with 13:04 remaining after opening the second half on a 12-3 run. But the Spartans really struggled taking care of the ball late against Maryland's full-court pressure.

Michigan State turned it over 11 times in the second half — seven in the final 2:26.

After Michigan State's fourth straight possession with a turnover, Fatts Russell sank a 3-pointer to get Maryland within 68-65.

MSU's Tyson Walker sank two free throws but after another turnover Russell completed a three-point play to cap a 12-2 run and make it 70-68. Walker answered with a jumper and Christie added two free throws with 31.1 seconds left.

Hart had a missed 3-pointer fall to his feet and he put it back to trail 74-70 and Michigan State was unsuccessful on an inbounds pass before Eric Ayala made a shot under the basket for 74-72.

An official review gave Maryland the ball back after another Michigan State turnover, but Russell was off on an open step-back 3-pointer and Christie was fouled and made two more free throws for a four-point lead with 6.6 left.

Michigan State (21-11) advances to play Big Ten player of the year Johnny Davis and No. 2 seed and 12th-ranked Wisconsin in the quarterfinals on Friday. The Spartans split the regular-season series with the Badgers, winning 86-74 at Wisconsin before dropping a 70-62 contest at home.