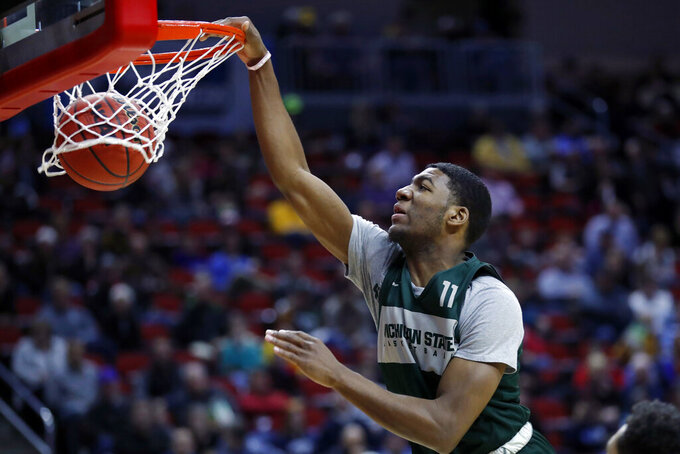 The Spartans need to focus on surviving the first weekend this time around. It has been four years since Michigan State (28-6) made it to the Sweet Sixteen, the longest such drought of the Izzo era.

The Spartans were stunned by 15th-seeded Middle Tennessee State in the opening round in 2016 before a pair of second-round losses: blown out by top-seeded Kansas two years ago and knocked off by 11th-seeded Syracuse last year.

But this version of Michigan State, seeded second in the East Region, looks poised for big things over the next few weeks.

The Spartans, who open NCAA Tournament play on Thursday against No. 15 Bradley (20-14), won a share of the Big Ten title and followed that up by winning the league tournament, besting rival Michigan 65-60 in the championship game. Michigan State has one of the best point guards in the country in Big Ten Player of the Year Cassius Winston, and he's surrounded by a strong supporting cast of veterans like Nick Ward, Matt McQuaid and Kenny Goins.

Still, three straight years of packing for home in the first weekend has Michigan State wary. The Spartans promise they are not overlooking Bradley, which advanced after rallying from 18 points down to beat Northern Iowa in the biggest comeback in Missouri Valley title game history.

As the East Region opens play on Thursday, Louisville faces Minnesota in Des Moines and Jacksonville, Florida, is the site for LSU vs. Yale and Maryland against Belmont.

LSU players are moving on without coach Will Wade. They don't have much choice.

University officials won't allow Wade to resume his duties unless he speaks with the school about the reports of an FBI wiretap that resulted in his suspension. LSU (26-6) lost to Florida last week in its first game in the Southeastern Conference Tournament. But the third-seeded Tigers feel like they're starting to find their footing under interim coach Tony Benford, just in time for Thursday's game against 14th-seeded Yale.

"The ideal family is when one person is down, the other person has to pick them up," guard Skylar Mays said.

Yale (22-7) is back in the tournament for the first time since 2016, when the 12th-seeded Bulldogs upset Baylor in the opening round and gave Duke a scare in the second round. Alex Copeland, Trey Phills, Blake Reynolds and Thomas Ryans were freshmen on that team and they believe the experience could pay dividends in their return trip.

"As much as I enjoyed that, I think I have vivid memories of being on the bus leaving March Madness and saying, 'OK, I've got to try to get back here before I graduate,'" Copeland said.

For all the talk about Minnesota's Richard Pitino coaching against a Louisville team that fired his father Rick, this is a very important game for the Gophers' program.

Minnesota (21-13) hasn't won an NCAA Tournament game since 2013, and Pitino has been in Minneapolis for six seasons without a breakthrough in March. The 10th-seeded Gophers, who beat Purdue twice in March to snag a bid, are led by veterans Jordan Murphy and Amir Coffey.

"They go about their business," Pitino said about his team. "They're not about a beat-your-chest type of team. You make a three you're not going to see a bow and arrow. They're just going to get back on defense, and that's the way I like it."

Louisville is back after a one-year absence under first-year coach Chris Mack. The seventh-seeded Cardinals (20-13) are five-point favorites, and if they survive they could get a rematch with Michigan State in the second round. Louisville surprised the Spartans 82-78 in overtime in November, a win that helped shape their season.

After beating Temple in the First Four, Belmont (27-5) had little time to celebrate and prep for the sixth-seeded Terrapins. The 11th-seeded Bruins really needed to hibernate. Guard Dylan Windler offered some details into the team's quick turnaround, saying they rushed back to the hotel to pack their bags, took a bus to the airport, flew to Jacksonville, got to the hotel around 4:30 a.m., fell asleep a half-hour later, woke up at noon, ate breakfast, got treatment and then headed to the arena for a media session and a shoot-around.

"It's not optimal," coach Rick Byrd said. "Nobody would choose it. But we would choose it rather than be on the bus back to Nashville right now, which is where we'd be if we'd have lost last night."

"I think the (selection) committee could have probably had a little bit more self-awareness so we don't have to be up here answering these types of questions. But you know, I can't control that." — Louisville coach Chris Mack on his program facing Richard Pitino and the Golden Gophers.